So ends a letter to then Indiana University President William Lowe Bryan from the head of the department of Geology, Edgar R. Cumings, in 1924. 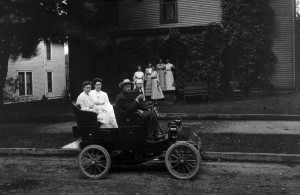 The First Car in Bloomington, 1907

Following the introduction of the first factory-made automobile to the city of Bloomington in 1907, the numbers steadily grew within the city and on the university grounds to where Cumings acknowledged in 1924, “The automobile is now a standard and universally recognized means of transportation and must be recognized and provided for by educational institutions just as it is by its business concerns. The later provide adequate parking space for the cars of their employees.”

By 1936, the situation had reached the point that upon a complaint by Alfred Kinsey regarding parking west of the Biology building, President Bryan even enlisted the aid of the renowned landscape design firm Olmsted Brothers, who were then under commission to prepare a landscape design plan for the entire campus. You can read their response here.

Due to the vastly increased enrollment of students on the Bloomington campus following the end of the Second World War (going from 4,498 in 1945-46 to 10,345 students the following year), the parking issue continued to balloon. According to the March 1948 minutes of the Faculty Council, the campus only had a capacity for only 200 vehicles, while  approximately 900 permits had been issued. That fall, the University Parking Committee recommended a drastic set of measures which included:

and rather sarcastically, Dean Herman T. Briscoe even made the suggestion that the “two faculty members who have the most traffic violations be added to the Parking Committee.” The collected parking fines were stipulated to go into the Library’s Book Fund. 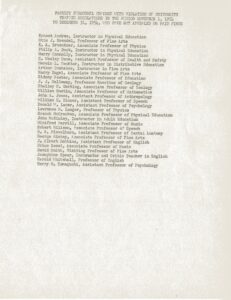 From the January 18, 1955 Faculty Council minutes

By December 1954, the Faculty Council even went to the extent of unanimously approving a resolution to include in their minutes “the list of faculty members delinquent in fines for traffic violations.” The Council felt that if they didn’t require the members of the faculty to abide by the regulations, they couldn’t require the student population to do the same. It seems that this method of rather pubic shaming proved effective, as in February 1955, the minutes reported that “the number of violations of parking violations by faculty members has markedly decreased since last December and that the payment of fines by faculty members charged with violations has increased.” The practice was discontinued in May of 1955 as the continual practice of compiling the list was deemed “impractical.”

Since then, the issue of parking has remained a continual point of discussion, with new plans issued every few years. To be honest, I began writing this post with the original intention of conveying how bad things have gotten, because I’ll admit I occasionally whine about the parking situation on campus. 🙂 However, my research quickly put me in my place. Today, according to Campus Parking Operations, the university has approximately 20,000 parking spaces for about 23,000 permits which equates to about an 87% capacity. In 1948, there was a capacity for only about 22%, yikes!

Within the last few days, the issue of parking has again received major headlines with the suggestion that IU May Outsouce Parking.