Ever stop to imagine what student life at Indiana University would be like without college sports and hundreds of extra-curricular student organizations? That was the reality faced by students in the 1840s. With fraternities only beginning to appear and no organized athletic program, student extra-curricular life revolved around academic pursuits. Two of the largest and most popular extra-curricular organizations were the literary Philomathean and the Athenian societies which were the center of student social life from the mid to late 19th century. 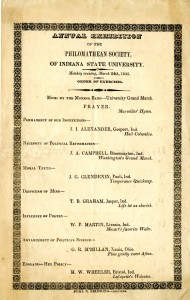 Philomathean Society Exhibition Program from March 24, 1845. It features the speech Homer Wheeler mentions in his letter to his brother.

These two rival organizations acted as students’ primary social outlet, performing many of the functions later fulfilled by fraternities. By the 1850s, they dominated student social and intellectual life. The purpose of these literary societies was to give students practice in public speaking and writing through orations, essays, and debates. The societies held public events and contests in which members would read or recite their works, which often revolved around literature, classical studies, music, philosophy, politics, or current events. Excelling in these events was considered a great honor, and winners were often well-known and respected by students and faculty. Speakers from these societies were chosen to speak at Commencement and other campus functions, such as celebrations and exhibitions, with the University President often heading the procession. With the emergence and popularity of Greek fraternities, as well as the increase in more specialized clubs and student organizations, participation in these literary societies declined in the late 19th century. Membership began dwindling in the 1880s, and these organizations were listed in the University Catalog for the last time in 1893. 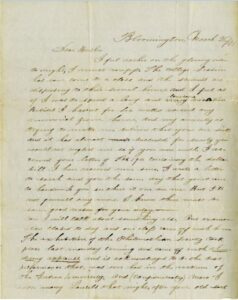 Homer Wheeler, an Indiana University student from 1844-1846, was a member of the Philomathean Society. In a letter to his brother Maro dated March 26, 1845, Homer describes his successful performance at a Philomathean Exhibition and explains the notoriety it gave him across campus. The following excerpt describes his experience:

“The exhibition of the Philomathean Society took place last monday [sic] evening and came off with thundering applause, and is acknowledged to be the best performance that was ever had in the rostrum of the Indian[a] University, and (confidentially) Maro I won many Laurels that night, after your old sort in White Pigeon. You will see by the scheme which I send you that I closed the performance. When I took my seat–the house jarred with stamping of feet. 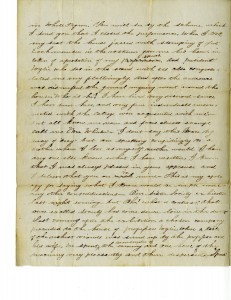 Each member in the rostrum gave me his hand in token of aprobation [sic] of my speech. And president [sic] Wylie who sat in the stand with us also congratulated me very flatteringly. And after the audience was dismissed, the general inquiry went around the house, “Who is he”? I have lived very reserved since I have been here, and very few individuals unconnected with the college were acquainted with me:–but all know me now and faces almost strange call me “Mr Wheeler”…Last evening after the exhibition a chosen company proceeded to the house of professor Wylie where a table of the richest viands was served up by the professor and his wife. We spent the remainder of the evening and one hour of the morning very pleasantly, and then dispersed…You may think by this that I am getting to be a galant [sic]–but it is not so. 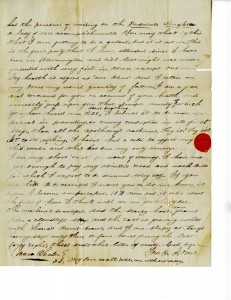 This is the first party that I have attended since I have been in Bloomington and till last night was unacquainted with every girl in town except one.”

Next time you’re cheering for your favorite Hoosier athlete or participating in a club activity, think about what it might have been like as a student 150 years ago.Instead of an athlete, you might be cheering for an orator, and instead of organizing a club event, you might be composing persuasive essays about current political issues. Interested in learning more about student life in the 19th century? Our small collection of Homer Wheeler’s letters have been digitized and are now available for viewing, along with other collections about early student life. Contact the IU Archives for more information.