So reads the cemetery deed signed by George G. Dunn on November 21, 1855 bequeathing the family burial plot solely to the decedents of three Revolutionary War heroines Ellenor Dunn, Agnes Alexander, and Jennet Irwin and forever protecting the site from sale.

Indiana University holds a unique distinction among other campuses in the country as the home to two cemeteries. The story of the second, Rogers Cemetery in front of Foster Quad, remains hazy and we’ll leave it for another time. However, the story behind the better known Dunn Cemetery nestled next to the Memorial Union near the center of campus, is a rather lengthy tale.

The three-sided corner grave stone, the oldest in the cemetery, marks the graves of three 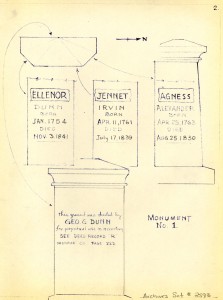 sisters who came to Bloomington after serving as aides in General George Washington’s Revolutionary army. Legend has it that they worked side-by-side with the Generals’ men sewing on buttons, bandaging wounds and even melting their pewter plates and other metals into bullets. Later the three moved to the then-tiny community of Bloomington, where Ellenor Dunn – the oldest of the three – and her husband Samuel, who was born in Ireland, purchased 160 acres of farm land from the government and built a home which stood near the site of the present-day fieldhouse (HPER building).

Upon his death, Samuel willed the family estate to his eldest son, George Gundy Dunn, who officially established the boundaries of the family burial plot and then willed the land to his son Moses. Following the fire of 1883 which destroyed the main Indiana University campus building, then located at Seminary Square, the university trustees purchases 30 acres from Moses Dunn known as Dunn’s Woods on which to establish a new site for the university. As the university has grown however, the cemetery has remained untouched  – protected by George Dunn’s foresight which forever deeded the family plot to his descendants.

In honor of tomorrow’s spooky festivities, close your eyes and conjure up visions from the following words taken from the 1940 issue of the English Department’s journal The Folio, in which Richard Bruick describes an afternoon walk through the hallowed ground: 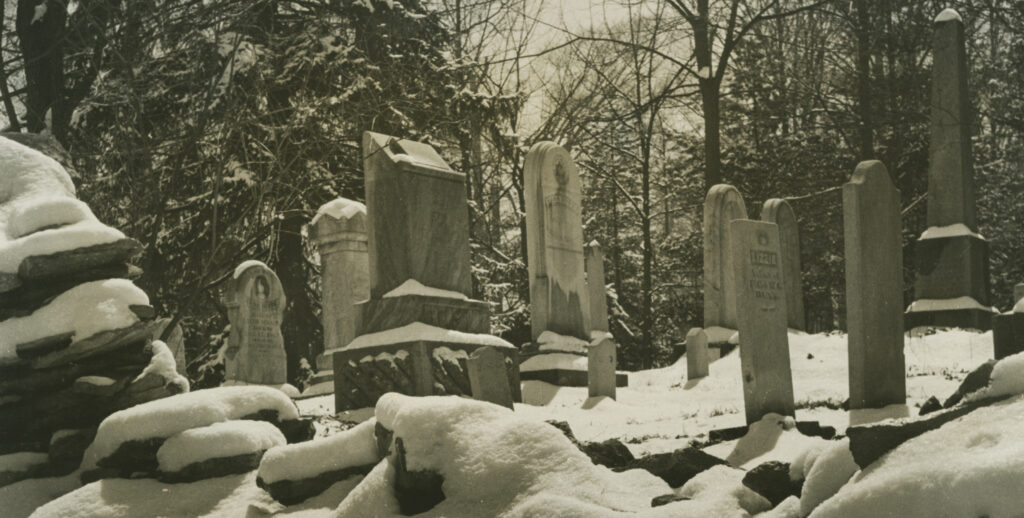 Once inside, my memory of the outer world was expunged instantly; and, my perception thus circumscribed in its activity…What dull stones they are, gray and drab, as though chosen expressively to symbolize the gloom of life departed. They stand disconsolately in awkward rows, some leaning with the pardonable weariness of a hundred years’ service, others gaunt and worn in the faithful discharge of duty. What is graven on them matters little, for these were people like you and me, whose impress on the world was slight, and lingers not at all…

Their mansion is poor and unkempt, but the dead sleep peacefully. Tenacious ivy lies heavy in the avenues of their stone village, and in their bedsteads, like thick green coverlets. The trees are young here. They have followed the residents by many years – all except that awesome brooding fir, standing great and timeless as though he had absorbed the immortality of all these buried souls, watching in silence over the rock-paled kingdom.

There is beauty here, but I am suddenly oppressed. The wind blows colder and the sun does not shine so bright within these confines. I believe I shall retrace my steps through the iron gate in the wall, back to the evanescent world outside…

While today the cemetery serves as a topic for Halloween, in reality for campus residents the cemetery is one of the most peaceful spots on campus. Situated next to Beck Chapel (1957) this little green spot is more condusive to quiet meditation among nature rather than imagining it to be home to spooks and goblins. In discussing the location of the chapel, Frank Beck most appropriately described the site:

Voices from this spot speak of vanishing years. They proclaim our everlasting link with the pioneer who gave us this spot and he ground about it. They remind us also of the inspiration from which stemmed our University and of the loving toil which nurtured its early growth. Where would one search for a spot more harmonious as a location for a Chapel of Prayer and Meditation.

Further information about Dunn Cemetery and Beck Chapel can be found in the Dunn family collection or the Frank and Daisy Beck papers.