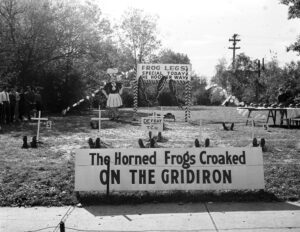 Coach definitely didn’t prepare us for this.

Homecoming came and went last month and, while the game against Michigan State could have ended better for the Hoosiers, it was still a fun weekend for students, alumni, and all fans of Indiana University. As someone who has been on the campus for only two years, I must say it is quite impressive to see how excited people on campus get for Homecoming. From Paint the Town Crimson Day to the talent competition and pep rally before the game, it’s obvious that all Hoosiers have a lot of pride in their school and have for the last one hundred years since Homecoming became a tradition at IU. It is because of this awe-inspiring level of school pride that I thought I would share with you some fascinating photographs that were recently added to the online collection.

A big part of the Homecoming festivities for students has always been the competition between the campus fraternities and sororities over who can decorate their house in the most creative way. The competition was especially fierce in the 1940s. For example, the highlight of Homecoming 1946, against Iowa, was a makeshift slaughterhouse with animal hides hanging from the sides and live cows grazing on dying cornstalks. 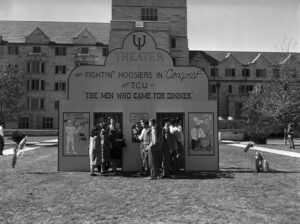 I sure hope someone brought popcorn.

But perhaps the most outrageous year for Homecoming decorations was 1941. On the brink of entering World War II, the Hoosiers first had to get past the Horned Frogs of Texas Christian University. It was a big challenge but the fraternities and sororities pulled out all the stops to help IU gain the psychological advantage.

IU students hit TCU in every way they could; they built a giant oil rig that compared TCU to a dry Texas oil field; they built the facade of a small movie house in the middle of the Men’s Residence Center, now Collins Living-Learning Center, showing a film depicting Hoosiers as knights in shining armor skewering and cooking up frog legs; they made signs telling TCU players to enlist in the war so they wouldn’t have to play the Hoosiers; they even went so far as to build a mass grave of TCU players “killed” on the football field! 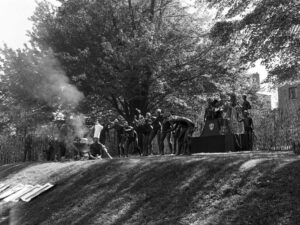 This takes tailgating to a whole new level.

But by far the most bizarre decorations from Homecoming 1941 came from Delta Upsilon. Clearly a different time in history: the boys covered themselves in dark body paint and tribal makeup and had a barbecue on the house lawn of what is probably supposed to be the head of a TCU player. They were clearly out to “skewer” the opposition. DU was recognized with the best fraternity decorations award that year.

To view these and many more images from IU’s history, please visit the University Archives Photograph Collection by clicking here. Images are being added every day so please be sure to visit regularly to see what’s new. Oh, and don’t feel bad that IU came up short against Michigan State. TCU ended up beating the Hoosiers 20-14.