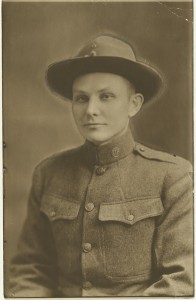 Horace Porter Goff was 28 years old and a student in the middle of his final year at Indiana University when he decided to enlist as a soldier in the United States Army in December 1917. Goff was assigned to the 30th Engineer Regiment (Gas and Flame), which later became the 1st Gas Regiment. This regiment played a significant role in military history because it was the first to use gas and flame in combat. This form of combat was introduced in WWI, and the US War Department required a gas regiment for the first time in order to keep up with the German military, which had been using poison gas since 1915. Because of his experience as a chemistry major at IU, Goff was chosen for this regiment. He says in a letter to his parents, “I cannot say what kind of work I will be assigned to. If I get the kind that is connected with what I want it will be the manufacturing and analysis of gases. The army is a very uncertain thing in a way and it might be that I will have to be one that fights with the gases and flame” (December 19, 1917). Goff was correct in noting the uncertainty of the army, as he ended up serving in combat at the Western Front in France during the climax of the war. 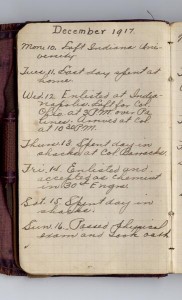 One of the first entries in Goff’s diary. Most entries follow this format and include brief sentences about his daily activities.

Goff’s letters describe his life as a soldier, including training and drills in Columbus, Ohio and Fort Myer, Virginia, his explorations of the French countryside, and his experiences hiding in German foxholes at the Western Front. The majority of the letters are written to Goff’s parents in Indiana and include reassurances that he is safe and, more often than not, requests for his mother’s homemade cakes and pies. Goff arrived in France in early March 1918 and underwent more training before entering combat in late June 1918. Initially, he provides little information about the war, perhaps so as not to worry his parents, or perhaps to avoid disclosing his location and orders. As he gets closer to the front, he begins to provide more details about the trials and atmosphere surrounding battle. One of his initial experiences in witnessing the effects of the war firsthand occurred not long after he entered combat. Upon seeing the war front for the first time, he writes:

“It was my first experience to see towns that had been shelled by the Germans. Some of the buildings had large shell holes thru them while others were a total wreck. These towns have all been vacated. They certainly look desolate. Occasionally you see an old man or woman groping along the street or looking out of a window. These people, I judge, are some that thought it not worth their while to move and would stay as long as a wall stands. Things were rather quiet. The stillness was broken once in a while by a sniper shooting a machine gun or an occasional report of a big gun. The sound rolled across the valley like thunder and we could hear the shell when it burst several miles back of the German lines. About 11:00 o’clock a German plane came over and dropped some shells, but it was soon located by an anti-aircraft gun and was made to beat it back…At last I have had my imagination and curiosity satisfied. Although our work is a little dangerous and hard while it lasts, I consider myself lucky when I look down and see the poor fellows in the trenches. You can see some that have crawled over the edge and lying on the ground sleeping while others are resting and at the same time keeping on the alert” (June 29, 1918). 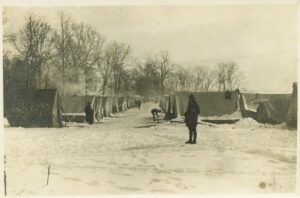 Photograph of the camp at the rifle range in Annapolis, MD where Goff received training before going to France. Goff mailed this in a letter to his parents dated February 24, 1918. He included the following caption with the photograph: “A street showing our tents. The 4th tent down on the left hand side was our tent. It gives you an idea of the snow and cold we had to contend with there.”

By August, Goff reached the trenches and became one of those “poor fellows.” He describes the living conditions as less than ideal, writing:

“Our homes were dugouts and our companions were fleas, cooties and rats ‘bocu’ (very many). The worst part of it all is that the rats are a little too friendly for solid comfort. It is nothing to wake up and feel something crawling along your back as if it wanted to share part of your bed. I don’t know how they live in such places but from all appearances of the size of them they certainly get something to eat. Fleas and cooties really make it more uncomfortable for us than rats” (August 17, 1918). 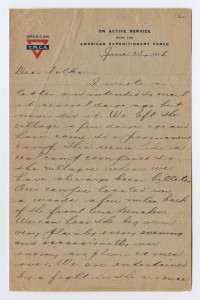 First page of a letter Goff wrote from France to his parents in Indiana, dated June 25, 1918. Goff often wrote on this stationery, which the YMCA gave to soldiers on active duty.

Goff spent several months at the Western Front and was present at the Meuse-Argonne Offensive, a month-long battle that lasted from September 1918 until the Armistice on November 11, 1918. It is widely referred to as one of the bloodiest and most casualty-ridden battles in U.S. history. In a letter dated about a week before the offensive officially began, Goff provides moving details about his experiences in the trenches. He writes:

“We returned to camp yesterday at 6 o’clock after spending six days in the trenches. You no doubt will have read the home papers by the time you receive this letter in regard to the big drive which the boys are pulling off. It started on Thursday the twelfth at 1 A.M. and we were in the thickest of it all, where the shrapnel shells were bursting and the cannons roared. Can you imagine eighteen thousand pieces of heavy artillery talking at the same time? The artillery opened up with a heavy barrage at 1 A.M. and continued until 5 A.M. Then a rolling barrage started, followed by the infantry charging over the top. I was in the front line trench at the time, where I could see and hear everything. It was something that I will never forget. A few hours after the infantry went over we followed them but they went so fast we couldn’t keep up so they brought us back to camp.

I saw my first German trenches and dugouts. Some of their dugouts are almost like a home. Night before last we slept in one of these holes in the ground that was thirty feet deep, reinforced with steel and concrete. As we had had very little to eat for forty-eight hours, our appetites were replenished by some smoked bacon, ham and bread which the Germans had left. Beyond a doubt our drive was not expected by them, for you could see signs of a hasty retreat everywhere. Provisions of all kinds, ammunition and guns were found in most of their dugouts. I have a pair of small wooden sandals which I found in a German trench. They are hand made. I intend to send them to James if I can. I also have a couple of German hand made canes which I would like to send home but I don’t see how I can pack them so they would go. I also have a button as a souvenir from the first dead Boche I saw” (September 17, 1918). 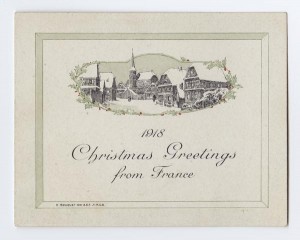 The front of a postcard Goff sent to his grandfather, B.L. Goff, while stationed in France. Postcard is dated November 20, 1918.

Despite the war around him, not all of Goff’s time was occupied in drills and combat. Goff also writes about his leisure activities, explorations around France, and observations about French culture made during his off-duty passes. He describes his first impressions about France to his parents, writing:

“I have been enjoying myself over here. The people are very hospitable and willing to give you anything they have. Of course on account of the war their hospitality is limited. You can see poverty to the greatest degree. We are stationed in a very small village surrounded by mountains. Most of the people live in little villages located in the valleys. They have little plots of ground on the outskirts of the town that they farm. … The people however are not very progressive. They plough with their horses in tandem fashion and they drive to wagons the same way. I was very much surprised to see their horses. As a rule they all have find stock, mostly percherons” (March 24, 1918).

A few months later, he observes the effects of the war in the village where he is stationed. He explains:

“Everybody works — men, women, and children alike. You never see a strong, able bodied man in the field for they are as scarce back here as hen’s teeth. It looks hard to see a young girl twelve or thirteen years old working along side of an old man, both pitching hay and the mother loading. That is what I saw this evening just in front of our billet” (June 4, 1918).

Although Goff enjoys traveling in France, even his in his leisure time, signs of war are all around him. He frequently describes the hollow remains of bombed buildings and comments on the poverty, high prices, scarcity of food, and presence of women in black mourning clothes in every city he visits. During his 18 hour pass off duty in August 1918, German soldiers dropped approximately 12 bombs on the town where Goff was staying. One fell about a block from the hotel where he was sleeping, setting a building on fire. Goff left France in late January 1919 and returned to the United States on February 2, 1919. He received his honorable discharge papers on February 15, 1919. 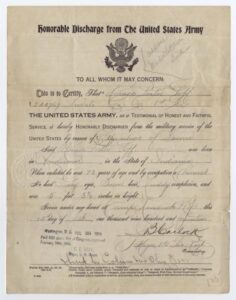 I have been working with the Digital Library Program to digitize the entire Goff collection, which includes Goff’s diary, 54 letters, discharge papers, an Indiana University Commencement Program from 1918, photographs of Goff and his regiment, and transcriptions of the diary and letters typed by Goff’s grandson, James M. Goff, in 1983. Images of all of these items are linked to the finding aid for this collection and are currently available for viewing at the Indiana University Archives Online page. Contact the IU Archives for more information.