With such a mass of student organizations available to choose from on campus today, it is hard to imagine a time when the very first groups were established. As discussed previously on this blog, early popular student groups at Indiana University were literary societies which sought to give students the opportunity to develop critical thinking and oratory skills through debate and to establish a social identity on campus. Established in the 1830s, the two major IU literary societies were the Athenian and the Philomathean.

However, when the university accepted the first female student, Sarah Parke Morrison in 1869, male students balked at allowing women to join their organizations so the women set about to remedy the situation by establishing their own. In response, the Hesperian Society was established in 1870 to encourage the intellectual culture of women. With their first meeting on October 28, 1870 in Hesperian Hall, they quickly got down to business with their first debate: “Classes A and B debate, A affirm, and B, deny.  Question. ‘Resolved that a town or city is a better situation for a college than the country.'” The group continued to meet once a week, debating past and current issues such as whether the execution of Mary Queen of Scotts was unjust or if capital punishment should be abolished. 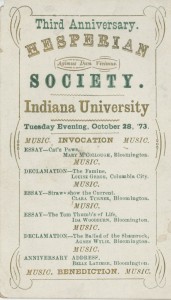 Lest you think it was all work and no play, it was popular for literary societies to host entertainment programs for the entire student body. The Hesperian Society hosted exhibitions and programs on campus, which included musical performers, oratory essays and poetry readings of local and out-of-town talent as well as an annual celebration honoring the groups founding on October 28th.

After nearly two decades of activity however, it seems that enrollment in the Hesperian Society was dwindling as the October 1887 issue of the Indiana Daily Student advertised the need for young ladies to join the society. It is assumed the group officially ceased in 1890.

Interested in learning more about the Hesperian Society? A finding aid for the small collection of records held by the Archives is now available!

Interested in the literary societies in general? There are several resources available to you! Search through Archives Online for literary societies – we hold several collections, including from the heavy hitters, the Philomathean and Athenian (the latter of which has been fully digitized!). Additionally, we have created an online exhibition on 19th century student life which, of course, discusses the literary societies!

As always, let us know if you have any questions!