It is always an interesting day interning in the University Archives – more and more I find pleasant surprises in the collections.  For science fiction fans like myself there is (until recently) an unknown treasure in the digital collection, three short fiction stories written by the American science fiction and fantasy writer C. L. Moore.  Written under her legal name Catherine Moore for the IU student publication The Vagabond (a collection of poetry, essays and fiction), these stories give a wonderful view of her emerging writing style. 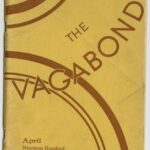 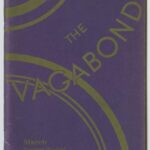 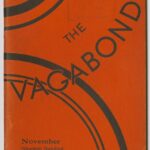 Thanks to a recent reference request, I began trying to find more information about Moore’s time while attending IU when she attended IU Bloomington because as is the case with many other successful authors, there is plenty of detail about her later achievements and writings, but not so much about the early days.  How did she get started? What did she write about?  What was her life like at that time?

Born in Indianapolis on January 24, 1911, as a child Moore did a lot of reading due to being frequently ill.  At the age of 18, she enrolled at Indiana University, attending three semesters from the fall of 1929 through the fall of 1930. Pictures of Memorial Hall where Moore resided give you a sense of what life was like for her here at that time.  No School of Music, no Jordan Hall or greenhouse crowding up alongside.  Part of that great stone wall still exists but the archway is gone.

Other images show the dining, living and dorm rooms where she lived, studied and wrote. Perhaps this is where some of her inspiration for the “Happily Ever After” story came from? 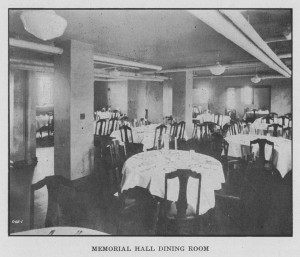 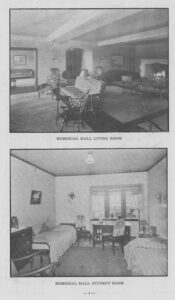 However, before officially declaring a major,  she withdrew from the university due to the financial hardships of the Great Depression and returned to Indianapolis to work as a secretary.

In the 1930s and 40s,  she began publishing stories in pulp magazines like Weird Tales and Astounding Science-Fiction.  At the time the genre was dominated by male writers and if a woman wanted to be published she was forced to publish under a pseudonym that was either male or ambiguously gender neutral.

As an example of that mindset, Moore met her husband, Henry Kuttner – also a science fiction writer – in 1936 when he wrote her a fan letter thinking she was a man.  The couple were married in 1940.  Their writing collaboration under the pseudonym Lewis Padgett resulted in “Mimsy Were the Borogoves“, considered a must-read classic.  You may remember recently a movie that was released called the The Last Mimzy which was based upon this story. Later in their careers, the pair moved to California to study at the University of Southern California, where Moore graduated in 1956.  Sadly, following the death of her husband in 1958, Moore stopped writing fiction though she sometimes wrote scripts for television shows such as Maverick and 77 Sunset Strip and taught writing courses at USC.  When she remarried Thomas Reggie she stopped writing completely though she continued to be very much involved with the Tom and Terri Pinckard Science Fiction literary salon, contributing to literary discussions with other members such as Larry Niven (Ringworld) and George Clayton Johnson (Twilight Zone and Star Trek).  Moore died on April 4, 1987 in Hollywood, California, in her home.

If you’d like to read the article which resulted from this reference inquiry and learn more about C.L. Moore check out this recent article in Kirkus!