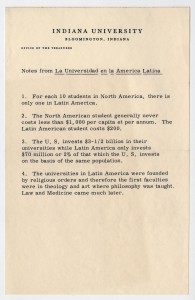 Statistics about education in Latin America, circa early 1960s.

Embezzlement, politically charged elections, customs delays, and inflation—no, I’m not talking about a network TV drama. These are all things encountered throughout the course of Indiana University’s international development programs in South America. Two such projects were The Modernization of the University of San Marcos (USM) project in Lima, Peru, which focused on restructuring the business and operating procedures of the USM and the Mechanical and Electronic Engineering Education program at the Universidad del Trabajo (UTU) in Montevideo, Uruguay, which assisted in the development of the university’s industrial education programs, mainly in the automotive shop, foundry, and applied plastics departments. While both programs were administered from 1964-1966, they each had very different experiences in working with the people and culture of South America.

One of my favorite things about working with international collections is finding documents discussing cultural observations and offering tips for interacting with people from other countries. Since these were based on (sometimes biased) American customs from the 1960s, they often reveal interesting cultural observations about Americans at this time as well. A 1964 untitled report by an unknown author describes the overall attitude towards America in Peru and offers interesting advice for better understanding the atmosphere of the USM. It states, “It is reported that most of the deans of the various faculties and the professors at the University of San Marcos are quietly pro-American. It is alright to be pro-American in Latin America, but you must not be too loud about it. Political candidates never take a pro-American stand openly. The students at the University are for the most part friendly toward Americans, but there are some who are very cold toward Americans.” The report also explains that Peruvians pride themselves on having less racial prejudice in their country than Americans, but openly admit to being more discriminatory on the grounds of social class.

Working in an environment with people used to different customs, beliefs, and traditions can create a set of challenges unique from those faced when working within the same country. In Peru, for example, representatives from Indiana University were faced with cultural differences that resulted in disagreements over program goals, especially regarding the restructuring of administrative offices. Many of the program’s goals involved modernizing office procedures, but this sometimes interfered with university traditions. A memo dated August 2, 1965 from Robert E. Burton to Joseph A. Franklin, then Vice President and Treasurer of Indiana University, suggests changing USM’s operating procedures by “eliminating some of the copying minutes by hand—although even this must be considered in relation to tradition and might be a cause for concern in the particular climate that exists prior to election of the Rector next spring.” IU representatives realized the need for balance between assisting the USM while still respecting their traditions. Burton notes, “We can’t solve all the political and economic problems, but our recommendations must be developed for Lima, Peru, and not Bloomington.”

Faculty and administrators from universities in Peru and Indiana University at a dinner party in Lima, dated January 21, 1964.

It is possible that some of these problems, along with the political climate surrounding the election of a new rector for the USM, prevented the IU team from accomplishing all of their goals. A letter dated August 3, 1972 from J.A. Franklin to Robert Drysdale, a Program Assistant with the Ford Foundation in Lima, describes some of these problems. He writes, “Members of the staff who visited San Marcos reported unwillingness of certain subordinates there to cooperate, and this resulted in foot-dragging at the very least as well as actual, outspoken opposition to modernization attempts. Some of the opposition was without question due to fear of any change and especially to change which might reduce the number of staff or require them to work more effectively.” After the Indiana University representatives left Peru, it was discovered that one of the administrators from the University of San Marcos had been embezzling funds from his university, explaining his resistance to change operating procedures, further complicating an already challenging process. 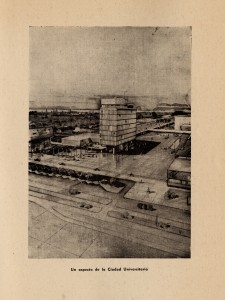 Drawing of part of the University of San Marcos campus in Peru from 1964.

In comparison, the program in Uruguay met with little, if any, resistance from faculty and administrators. While there were fewer personal and social conflicts, this program faced obstacles caused by miscommunications and bureaucratic procedures. At its onset, the starting date for the project was postponed 3 months because of delays in receiving host country and federal security clearances for the project leaders from Indiana University. Most problems were the result of delays in securing customs releases for shipments of equipment from the United States to Uruguay. It sometimes took more than 3 months for the equipment to be released, causing schedules to go awry. Additional complications occurred when metal-working lathes ordered in the United States arrived with standard measurement units, despite the specification that they be designed for the metric system, causing unexpected setbacks. 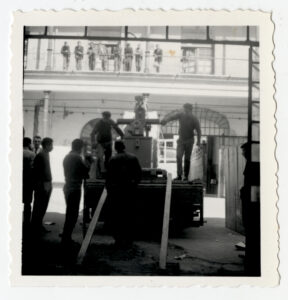 New equipment being unloaded at the Universidad del Trabajo in Montevideo, Uruguay, circa 1965. 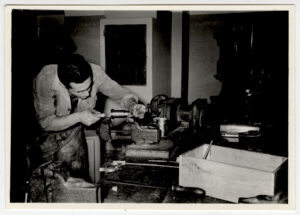 Another student, Donato Macellero, using some equipment in the Pilot Center. This area was remodeled and given supplies as part of the project sponsored by Indiana University and USAID.

Other issues were created by the economy in Uruguay and were completely out of the hands of the IU team. During the course of this project, Uruguay experienced drastic inflation rates, causing project costs to suddenly be several thousand dollars over budget, leading to delays in repairs and renovations. Despite these setbacks, the program in Uruguay managed to accomplish all of its goals within its intended time frame, with glowing reviews about the cooperation of the people from the UTU.

These programs represent only a fraction of Indiana University’s involvement in assisting institutions abroad. More information about these and other IU sponsored international projects can be found at the IU Archives. Stay tuned for future posts about IU’s involvement in Indonesia and the Middle East!