The year is 1841, you’re a resident of Bloomington, Indiana, and you would like to expand your mind … and oh yeah, you’re female. What opportunities are available to you? Indiana University wasn’t co-ed until 1867, so you cannot stretch your mind through higher education. Is it your lot to resign yourself to a life of quiet domesticity and motherhood?

These are some of the questions the charter members of the Edgeworthalean Society were asking themselves when they came together to form the first Bloomington, Indiana ladies’ literary society in 1841. Clearly these women were not resigned to keep quietly at home, and their decision to gather and learn among themselves was not without opposition,  as Mrs. M. E. Hughes, first society president, alludes to in her inaugural address. She also describes the purpose of the society as follows:

“Our object is the cultivation and improvement of the mind; and to effect this we have adopted such exercises and regulations as other societies of the same nature have found most conducive to the same end.”

“The exercises of the society shall consist of recitations, composition arguments, Reading, writing, diction, analysing [sic] sentences or any such exercises as may be found to be conducive to the improvement of its members.”

“In the progress of society the belief has been gradually gaining ground, that the station assigned to women in the social scheme, is one of much greater importance than it has hitherto been considered, and that her position in the various relations of daughter, wife, mother, mistress of a family and the acknowledged arbitress [sic] of the rules which regulate social intercourse, gives her an influence which may be powerfully wielded either for good or for evil. To enable her therefore to fulfil [sic] her destiny with credit and happiness to herself and advantage to others, philanthropists now deem it necessary to give her the aids of a solid and useful education.”

The minute book, which consists of the constitution and by-laws of the Edgeworthalean Society, as well as meeting minutes, contains the inaugural addresses of six society presidents from 1841 to the last entry dated June 1844. These speeches are rather rich in terms of early commentary on women’s education and position in society. 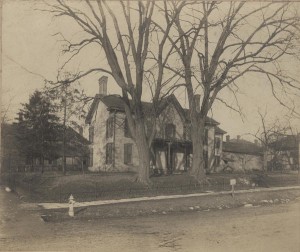 The Edgeworthalean Society met weekly, usually at the Monroe County Female Seminary at 7th Street and College Avenue, though it no longer stands. They also had fairly strict rules for entering the society, such as requiring a letter of petition with the support of two current members of the society. They aimed to remain respectable and include the role of “Censoress [sic] to generally supervise the moral character of the society” in their constitution.

Also in the contents of the minute book are philosophical/ideological questions posed for debate in the meetings.

Such questions include: Which most improves the mind: observation or reading? Which exerts the most pernicious influence over society, a Slanderer or a Murderer? Is manual labor a blessing or a curse? Which has the greatest reason to complain of their treatment, from the Whites, the Indians or Negroes? Which profession affords the best opportunities to benefit mankind — Law or Physics? Is Conscience an inate [sic] principle? Which would be most conducive to our happiness: to be at once created with all the knowledge to be acquired, or to obtain it by slow degrees? Did Napoleon exhert [sic] a good or evil influence over Europe? Is there more happiness found in the married, or in the single state? Should novels be abolished? Should capitol punishment be inflicted or not? Is happiness more dependent on the mind or surrounding circumstances? And these are only some of the questions debated through November 26, 1841!

The Edgeworthalean Society minute book is in the Indiana University Archives and has been recently digitized by the Libraries Digital Projects & Services Team! Just follow the link!