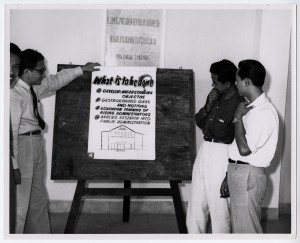 Ever heard the expression “A picture is worth a thousand words”? This was the idea behind a report about the progress of the Indiana University sponsored project to develop the National Institute of Administration (NIA) in Djakarta, Indonesia. The USAID funded project took place from 1959 to 1963 and focused on creating a training and research center in business and public administration in Indonesia. It was designed to train and educate citizens to become civil servants and administrators, to promote and provide research in the field of public administration, and to work to improve the effectiveness of government and public service throughout Indonesia. Indiana University assisted by providing consultants who helped to develop curricula and teaching methods, advise in campus administration organization, and purchase equipment, library materials, and research supplies for the new institute. 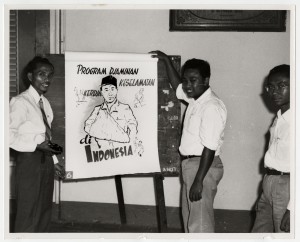 Students with a flip chart they created about the social security system in Indonesia.

Frequent progress reports were a requirement for these types of international programs, and they typically consisted of a formulaic outline of necessary information including people involved in the project, goals, and accomplishments, and were often completed somewhat perfunctorily by team members. For the Indonesia project, however, one consultant submitted a different kind of report to the University. John R. Campbell worked for the Department of Health, Education, and Welfare in Boston and often acted as a private consultant in areas of public administration. Because of this experience, along with a previous job as a consultant to the Brazilian government to assist with their social security program, he was hired by Indiana University in 1960 for a three-month consultant position in Indonesia. His main task was to assess the management and training practices of the Indonesian government and provide feedback about how the NIA could improve these programs. 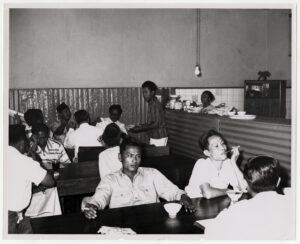 Students taking a break in the cafeteria. 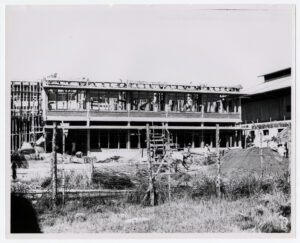 A new dormitory under construction.

After Lynton K. Caldwell, the IU Campus Coordinator for the project, found out about Campbell’s experience as an amateur photographer, he suggested that Campbell take photographs illustrating the progress, work, and activities of the Institute as part of his assignment. Upon completion of his job in Indonesia, Campbell was required to submit a report of his observations and suggestions. Campbell chose to combine his photographs with his written report to create a visual representation of the status of public administration alongside images of Indonesian students and rural life. 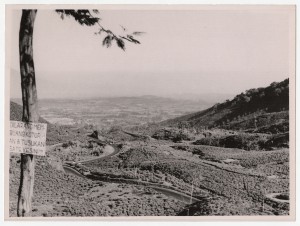 A view of Indonesia. The caption on the back of the photo indicates that the sign on the tree reads “Do not throw away trash particularly bamboo meat sticks.”

Campbell’s report contains a written statement about his experiences abroad as well as photographs of students with illustrated flip charts outlining the issues and goals for public administration in Indonesia. It also contains photographs of students, the IU project team, and USAID officers. Perhaps of more interest to those unfamiliar with public administration are images of the Indonesian countryside and rural life, including some scenic views, townspeople working, and transportation. According to Campbell, the 33 photographs are meant “to depict in graphic form what lays behind, what exists and what lies ahead” for public administration and government in Indonesia. Today, these photographs offer a rare and interesting view of Indonesia’s education, culture, and people in 1960 that is unique to this collection. 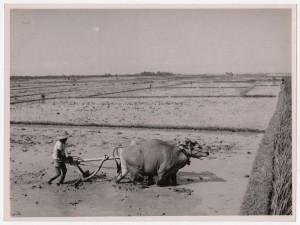 Indonesian farmer in a rice paddy.

In addition to Campbell’s report, this collection also contains 15 photographs taken by American project team members and placed in a scrapbook about Indonesia from the late1950s and early 1960s. Some of these photos can be viewed online through the Archives Photograph Collection. To learn more about Indiana University’s involvement in Indonesia, check out the finding aid for the recently processed Indonesia Public Administration Program records or contact the IU Archives!