The Archives is proud to say that the finding aid for the Cecilia Hennel Hendricks family papers is now available because this collection truly is a veritable treasure trove of both American and personal family history! As this rich collection tells the story of the family of Joseph and Anna Thurman Hennel,  it will help to know a bit of their family history. Joseph and Anna had three daughters: Cecilia, Cora, and Edith and in 1905 they chose to move from Vanderburgh County, Ind., to Bloomington so that their daughters could attend Indiana University. All three daughters went on to teach at IUB, with Cecilia and Cora having the lengthiest careers, beginning in 1904 and serving for 30 and 46 years, respectfully. (Cora became the first woman to get a PhD in mathematics at IU, and only the second person, male or female, to do so!)

If soldiers are your interest, you might like to know that during the Civil War Joseph Hennel was a member of Company I, 65th Regiment of the Indiana Volunteer Infantry and included in the collection is a small Civil War diary from 1864. John Hendricks fought in the 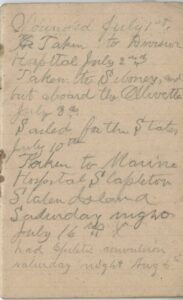 Spanish-American War in 1898, where he was wounded in battle. Several folders of correspondence chronicle his lifetime petition for his rightful veteran’s pension. The collection also includes correspondence with his family during his time in the war and hospitalization. 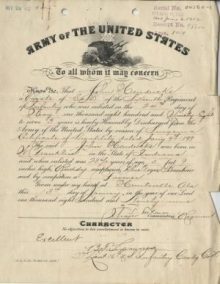 Interested in the financial lives of people living in the mid- to late 1800s? There are ledgers and account books galore for Joseph’s personal and business finances. We also have a folder of receipts and checks written to “Stables and Livery,” “Boots company,” and “Undertaker” services, as well as bills paid for telephone/telegraph services and electricity services.

The collection also includes personal and business ledgers and account books for Cecilia Hennel Hendricks and her husband John who lived in Cheyenne, Wyoming as homesteaders for a number of years, and raised bees for honey on their farm Honeyhill.

(By the by, Cecilia & John’s daughter Cecilia later published a selection of their correspondence in Letters from Honeyhill: A Woman’s View of Homesteading. It – and rightly so – gets rave reviews on Goodreads!)

The stars of this collection, however, are the women in family. While the collection does not house anything from Anna Thurman Hennel’s household life, there are numerous folders of correspondence over the years with her daughters. She was also very vocal (according to family letters) in getting the Hennel family to move from Evansville to Bloomington, Indiana so that their daughters could attend Indiana University.

The collection houses years of personal diaries and date books for both Cecilia and Cora, as well as boxes and boxes of family and business correspondence. While Edith’s voice is present throughout the years of correspondence, her presence is most felt through the many years’ worth of annual scrapbooks she put together documenting the families’ whereabouts and doings, using cartoons and handwritten or typed captions, which she made and sent to Cecilia Hennel Hendricks as holiday and New Year’s greetings. Cecilia and Cora were both published poets, as well as playwrights, and their various writings, musings, manuscripts, acceptance/rejection letters are housed in the collection. Cecilia also coauthored the first Palau-English Dictionary while she taught in Palau via IU in 1950, and Cora coauthored a mathematics textbook, A Course in General Mathematics in 1925. 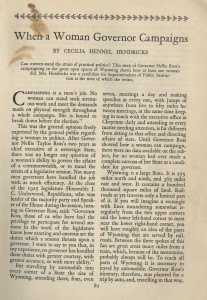 If giving up a university teaching position to marry (a man she had only met a few times!) and moving to the wilds of Wyoming doesn’t tell you about Cecilia’s drive, perhaps a little political work will? In 1926 during her time in Powell, Wyoming, she worked on the Nellie Tayloe Ross‘ re-election campaign for Wyoming governor, after Ross served as the first female governor in the United States when her husband died and left the office vacant in 1924. Cecilia was supported for the position of State Superintendent of Public Instruction, and campaigned with Ross.

The richness of this collection is evidenced through the hand and typewritten boxes of letters, published and unpublished writings and manuscripts, ledgers and account books, diaries and date books, and much much more. The lives of an entire family are essentially chronicled through this collection, and provide a lens through which we can look at American history and the lives of 19th Century female American scholars, homesteaders, and business-folk.