With the start of a new academic year, it seemed appropriate to review one of IU’s older, still existing traditions – the Freshman Induction Ceremony.

When did it start: The first Freshman Induction Ceremony was held in 1933 and was organized by George Ezra Schlafer, a member of the IU Department of Physical Education (later part of HPER). The event continued to be held annually through 1969. For the next eleven years from 1970 to 1980, Freshman Induction ceremonies were not convened. The event reappeared in 1981 and is still a prominent feature of Freshman Orientation events.

Where was it held? The first Freshman Induction ceremony was held in front of what was then called the Men’s Gymnasium (now called Wildermuth Intramural Center). Here is a brief description of that ceremony from the IDS of Sept. 9, 1933: “Orientation will be climaxed Monday night by a formal induction of freshmen into the ranks of the student body beginning at 6:55 pm in front of the Men’s Gymnasium. The procession will go from there to the Sun Dial and to the Gymnasium terrace to take part in the welcoming ceremony in honor of new students at 7:15 pm.” In 1934 the event was moved to the area in front of the Student Building. This remained the site until 1948 when the event was transferred to the Auditorium, where it continues to be held. 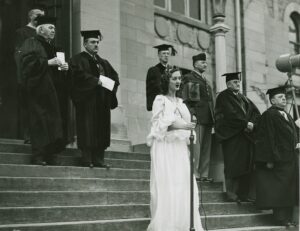 The Spirit of Indiana. Behind her stands President Herman B Wells and President Emeritus William Lowe Bryan.

What occurs at this event? What is its meaning? From 1933 until 1969 the Freshman Induction ceremony followed the same basic script. The ceremony began with music, followed by the processional of faculty and the platform group, and the playing of the National Anthem. The first person first to speak was a female IU student dressed in a white robe as the “Spirit of Indiana,” who represented the University’s search for truth and knowledge. The Spirit’s speech is too long to reproduce here, but here are some excerpts:

“The spirit that greets you here is the rich heritage of a glorious past made possible by students, who like yourselves entering the university, feel strangely far from home and intimate friends, but who soon adapted to their new environment. The university covets for each of you a like experience…Make the most of the opportunities while here, acquaint yourself with the best traditions of the university, leave them richer in tradition than when you entered it. Such is the Law of Progress. All that has been and all that is of the spirit of Indiana University welcomes you unreservedly.”

The next speaker was the IU President who read the Charge to the students:

“I am for those who see our University as it is, with all its strengths and yet with all its needs, and who therefore know it is at its best—its resolute integrity, its allegiance to the whole truth, its long service in bringing the young people of this State toward the fullness of the life of the mind, its passion for a clean and just democracy. I am for those who see through the superficialities to the University’s basic purpose: the intellectual development of her sons and daughters. It is in their growth that she exults, for by their excellence they will judge her. Across the earth, these sons and daughters join you in the pledge of the Psalmist of old: ‘If I forget thee, let my right hand forget her cunning. Let my tongue cleave to the roof of my mouth, if I remember thee not.’”

Upon finishing the Charge the IU President asked the students to repeat the Pledge to the University adopted from an oath delivered by Athenian youth pledging to dutifully meet their civic, military and religious duties.

“I will not disgrace the University for which I have received my education, nor will I abandon the comrade who stands by my side.”
“I will fight for its best interests, whether I stand alone or have the support of others.”
“I will revere and preserve its ideals and traditions, and will incite like reverence in others”
“I will strive always to quicken among my fellows the sense of social and civic duty.”
“I will cherish the sacred institutions of my country.”
“In all these ways I will strive to transmit this, our heritage, not less, but greater and better than it was transmitted unto us.”

With the conclusion of the Pledge, the IU President offered some personal remarks and then declared the freshmen to be official members of the IU student body. At the end of the President’s statement, the Dean of Music led the audience in the singing of “Hail to Old I.U,” after which the Grand Marshal led the recessional off the stage.

When the Freshman Induction Ceremony was resurrected in 1981 three major changes occurred in the script. A painting entitled the “Spirit of Indiana” replaced the IU student dressed in a white robe, and the President of the IU Student Association (in 1981 this was Bloomington’s present mayor Mark Kruzan) now delivered the “Spirit of Indiana” speech. In addition, the Pledge to the University was eliminated from the ceremony. However, the induction of freshman as official members of the student body remained as a central feature of the ceremony. 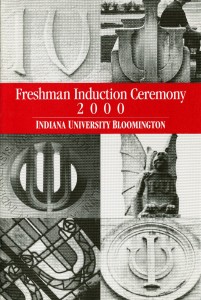 In recent times much about the ceremony has changed. The “Spirit of Indiana” symbolism and speech are gone, as are the traditional Charge. The Pledge has been reinstated, but it has been shortened and modernized and renamed the “Indiana Promise.” In this statement students promise that:

“I will be ethical in my academic work.
I will take personal responsibility for what I say and what I do.
I will respect the dignity of others, treating them with civility and understanding.”

Even though the Freshman Induction Ceremony has changed over the years, it still serves the same purposes: to provide a celebration of student’s academic aspirations and to officially welcome the freshman into the IU student community.