A graduate of Indiana University, Pauline Montgomery was a resident of Wayne County, Indiana, and spent most of her life working as an English and Latin teacher. However, Pauline and her husband, Robert, had a somewhat unusual interest — photographing tombstone iconography in eastern Indiana cemeteries. Just the hobby we all secretly want to take up, right? Actually though, I must admit that I have a fascination with death rituals.

Over her lifetime, Montgomery amassed a collection of nearly sixteen hundred tombstone photographs with a particular focus upon unusual grave markers and tombstones often with decorative or ornamental features. That’s a lot of time spent in cemeteries!

Although I very much enjoyed looking through a large number of the photographs, there isn’t space to show all of the pictures here. Below is only a small sample of photographs that I found most interesting. Notice the varied fonts, dates, and iconography. 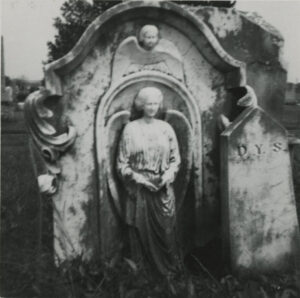 The back of this photograph notes that this is the grave of a woman who died in childbirth.

There were a large number of tombstones for children, a reminder that life expectancy, especially for children, was much shorter than it is today.  These tombstones were usually accompanied by a carving of a sleeping child or lamb, or in a few instances, a heart-wrenching carving of a pair of empty shoes. One example that I was surprised to see were tombstones in the shape of tree stumps symbolizing a life cut short – although I saw two examples of tree stump tombstones for those in their seventies. 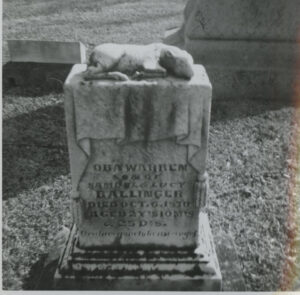 A carved lamb rests on the top of this child’s tombstone. 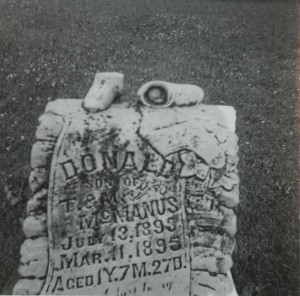 An empty pair of shoes is a symbol of the death of a child. 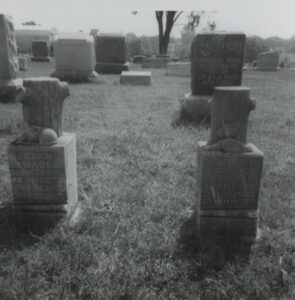 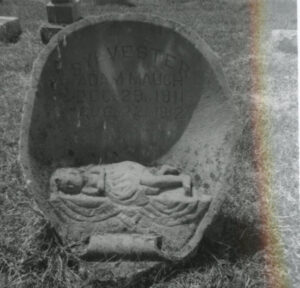 Carvings of sleeping children represented the death of a child. 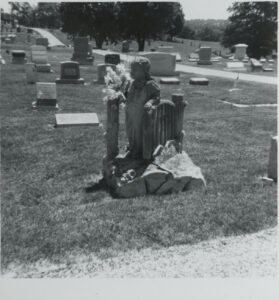 Cherubs are common carvings for the tombstones of children. Angels represent spirituality.

Military tombstones were also common finds among the photographs. 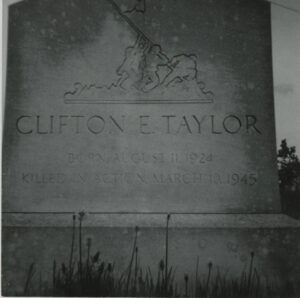 The iconic Iwo Jima flag raising is depicted on this WWII soldier’s tombstone. 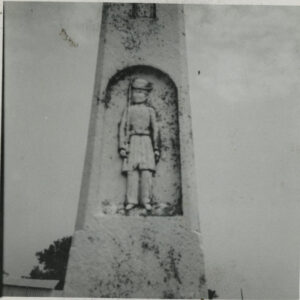 A Civil War soldier who likely served in the Iron Brigade. The Brigade largely consisted of Midwesterners, including many Hoosiers. 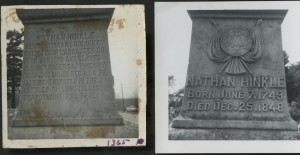 Tomb of a Revolutionary War solder. Details of his military service are listed on the left hand picture.

The vast majority of the tombstones feature Christian imagery, such as crosses, depictions of Jesus or the Virgin Mary, heavenly light, wheat, doves, Bibles, and angels. Also very common were engravings of hands praying, shaking, or pointing upwards to heaven. 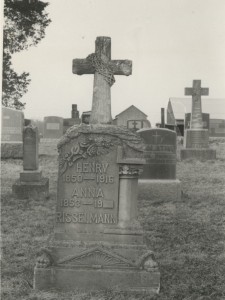 This Christian tombstone features a Latin cross with a wooden appearance encircled by a crown of thorns. 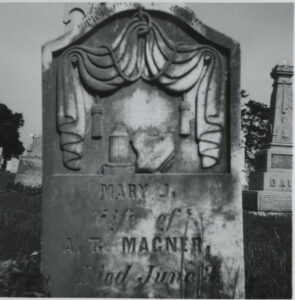 The curtains on this tombstone represent a passage from one existence here on this earth, to another, beyond. Drapery was also a symbol of grief and mourning. 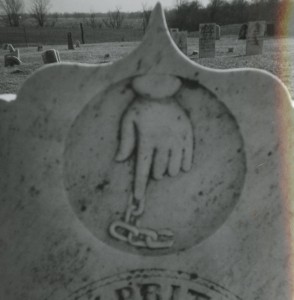 Chain links can represent dead or living family members. A downward pointing finger could point to an inscription below or symbolize being chosen by God. 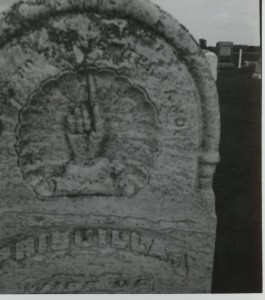 The finger points upwards to heaven, indicating where the soul has gone. 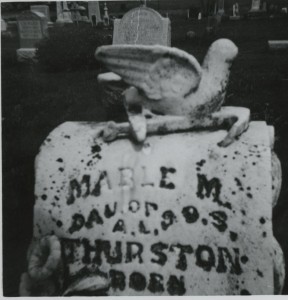 A resting dove is a Christian symbol of peace, purity, and resurrection.

Below are a selection of other various types of tombstones and iconography found in the Montgomery collection. Note this first one, which features the biblical quote from Romans 12:19 along with the image of a noose. A bit of research using historic Indiana newspapers led me to the answer. John Davis and his brother, Jesse, kidnapped and raped a fourteen year girl from the Clark Township. They then left her tied to a tree in the woods, where she was discovered by a search party. A group of fifty armed vigilantes set out after the brothers. They caught up with John first and promptly hung him. 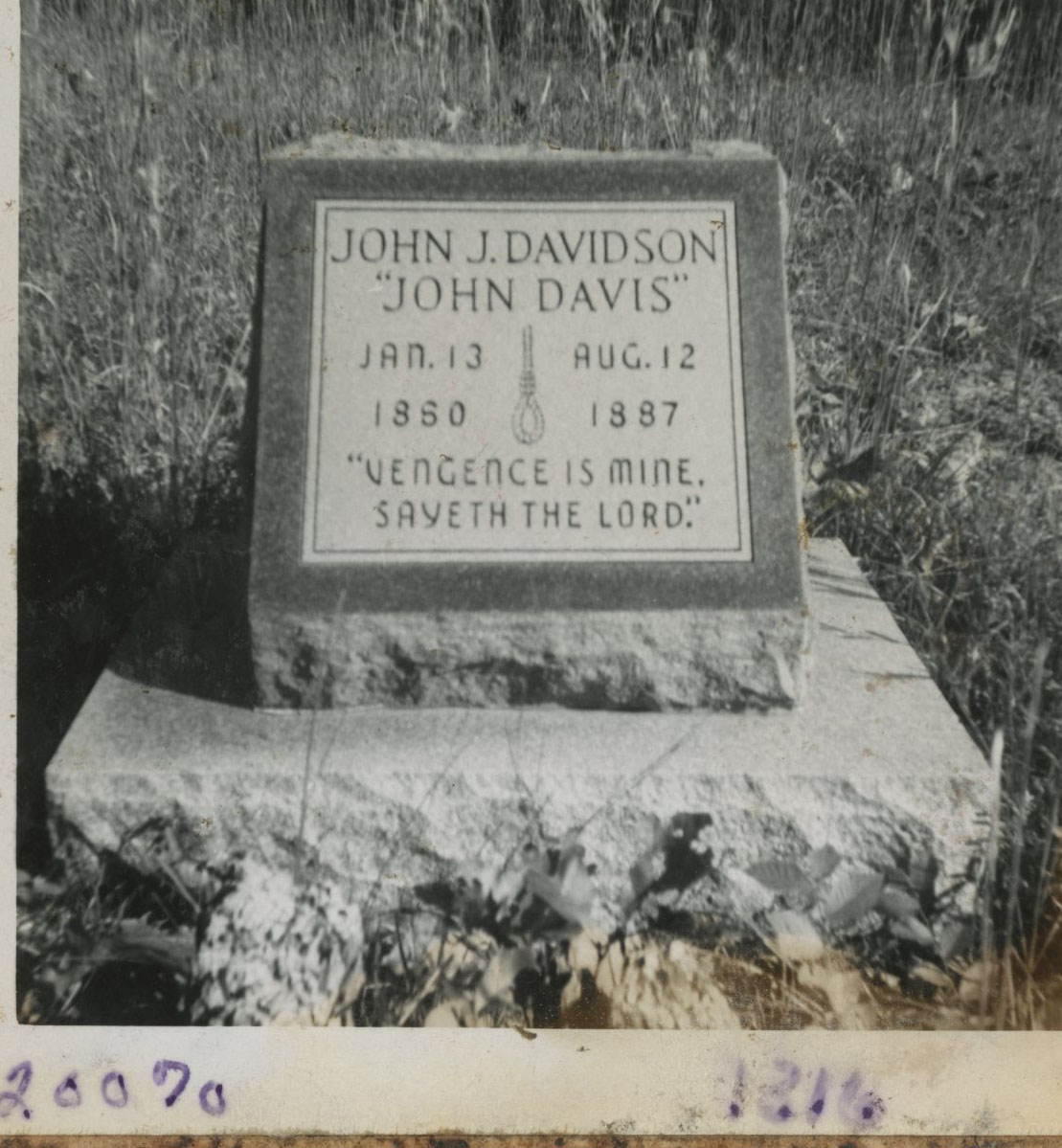 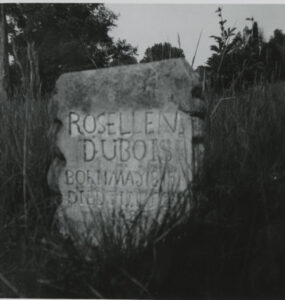 Unlike so many of the others, this tombstone has a very rough, unprofessional look to it. 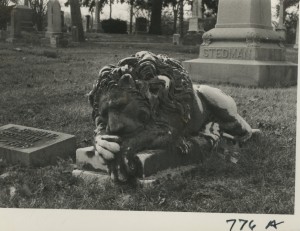 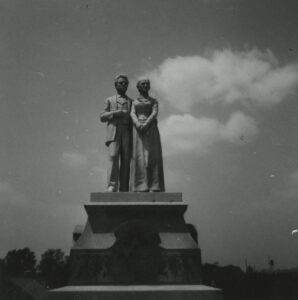 I encountered a couple of photographs in which statues of the deceased stood over the grave site or tombstone. This must have been very costly! 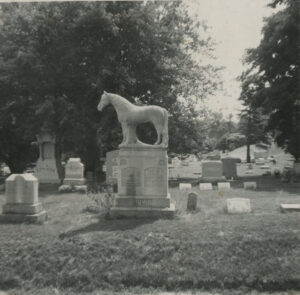 Horses usually represent military service in the cavalry, but this carving appears to be for a couple’s grave-site. 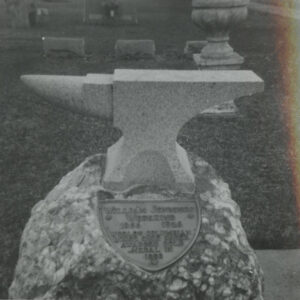 In this case, the tombstone reflects a profession. During his lifetime, this man was a blacksmith. The inscription notes that he won an award for shoeing horses. 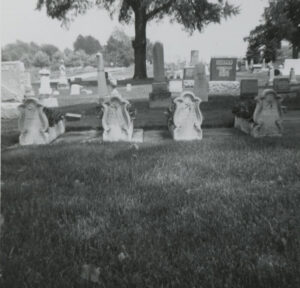 If you look closely, you can see that the fronts of these tombstones are designed to hold a small flowerbed. 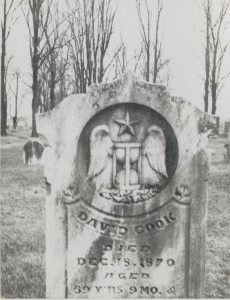 A winged hourglass is a reminder of one’s fleeting earthly life and mortality. Time flies – literally. The star is a Christian symbol. 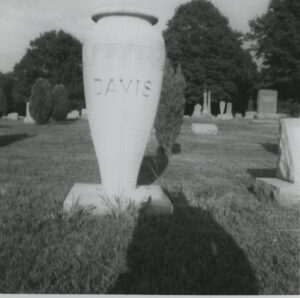 An urn can represent death of the body and return to dust.

The above are only a small sample of image from the Montgomery collection, to see more, please contact the IU Archives!