Turning eighteen is a big deal when you are in high school because you have your first taste of adulthood, but celebrating your 21st birthday is prized even more, especially in college. Undergrads who discover that their friends are turning twenty-one, tell them “Let’s go out and buy you drinks!” What students may not expect to receive on their birthday is a cream and crimson card saying “Happy 21st Birthday! with an IU logo. In 2003, the Parents Foundation gave funding to the ADIC, the Alcohol-Drug and Information Center (now OASIS), to implement a program to distribute 21st Birthday cards to IU students on their birthdays. The ADIC was established at Indiana University in 1982, under the name Alcohol Information Center, and is operated by the Division of the Dean of Students.  The mission of the ADIC is to provide information on alcohol and other drug abuse substances to the Indiana University community through Peer Education Programs, research and programing, sponsorship of the BACCHUS (Boost Alcohol Consciousness Concerning the Health of University Students) student group, and partnership on the Campus-Community Commission on Alcohol initiatives.

Dee Owens, previous director of the ADIC, stated in her proposal for the 21st Birthday program to the Parents Foundation Committee that “Each year, 18% of our students reach a milestone in their lives – their 21st Birthdays.” Owens goes on to say that “Also each year, we hear about the tragedies surrounding unsafe, so-called rites of passage on this date, including drinking contests that result in alcohol poisoning or tragic accidents.” 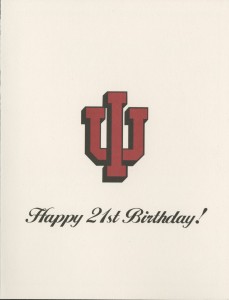 The birthday card program reached about 6,477 students who turned 21 while attending Indiana University. The inside message of the card included a few facts about alcohol consumption from the National Institute on Alcohol Abuse and Alcoholism (NIAA) and a message stating, “The Indiana University Alcohol/Drug Information Center (ADIC) wish you a Happy 21st BIRTHDAY!  Be safe and smart if you choose to consume alcohol.” Along with the card, students received a wallet-sized glossy card describing symptoms of alcohol poisoning and emergency contact information. And for fun, students received a coupon for a free ice cream cone, as a reminder that not all celebrations need alcohol and that there are other ways to have a great time on your birthday. Owens states that “the intent of the card and the true gift is to raise awareness about the deadly consequences of drinking games that are often encouraged on 21st birthdays, such as ’21 shots,’ and to promote healthy choices, there by deterring such behavior.”

The ADIC records dating primarily from the tenure of Dee Owens have been processed and are available for research! Contact Archives staff for further information!