Over two years ago I started processing the papers of Professor Emeritus Henry H. H. Remak. Now his papers are available for research! Before telling you more about the collection, let me tell you a little about Professor Remak himself. Henry H. H. Remak was born a German Jew in Berlin on July 27, 1916. In 1936, Remak came to the United States on an international YMCA scholarship that provided funding for young Jewish refugee scholars. IU Bloomington’s chapter of Sigma Alpha Mu, a fraternity with strong Jewish ties, sponsored Remak upon his arrival to the United States. Remak eventually attained a master’s degree from IU in 1937. After receiving his PhD from the University of Chicago, he returned to IU as a full-time professor for the Department of German in 1948. From there, Remak went on to play an instrumental role in the founding of two other departments with which he would remain actively involved – the Department of Comparative Literature and West European Studies founded in 1949 and 1966, respectively. He would serve as chairman for the Department of German during the summer of 1962, for the Department of Comparative Literature intermittently between 1954 and 1963, and for West European Studies from 1966-1969. Another administrative role that Remak filled during his tenure at IU was as Vice Chancellor and Dean of the Faculties from 1969-1974.

Though Remak officially retired from IU in 1987, he remained active at the university. For one, Remak volunteered to teach undergraduate honors courses from 1987 until his health began to fail in 2005. Additionally, it was following his official retirement that Remak was appointed director of the Institute for Advanced Study from 1988-1994 and again as interim director from 1997-1998.

In addition to his active involvement as a teacher and administrator, Remak was also a prolific scholar in the field of comparative literature. As such, he published numerous articles, chapters and books on a variety of topics including the modern German novel and novella, the history and principles of Comparative Literature as a discipline, Franco-German literary and cultural relations, European Romanticism, German and European Realism, and student movements and countercultures of the 1960s and 1970s.

Throughout his life, Remak was committed to serving IU and the Bloomington community at large. As testament to his exemplary services as a teacher, administrator, and scholar Remak received a number of awards including the Lieber Award for Distinguished Teaching in 1962; IU’s Distinguished Service Award in 1987; and the prestigious statewide Sagamore of the Wabash; to name just a few examples. Professor Remak passed away on February 12, 2009.

The collection – comprised of 73 boxes – contains papers spanning the years 1914 to 2010. It is organized into the following series: Administrative; Teaching; Research and publications; Professional activities; Correspondence; and Chronological. While it would be difficult to address all of the interesting facets of this collection, I will outline a few highlights that make these papers truly unique: 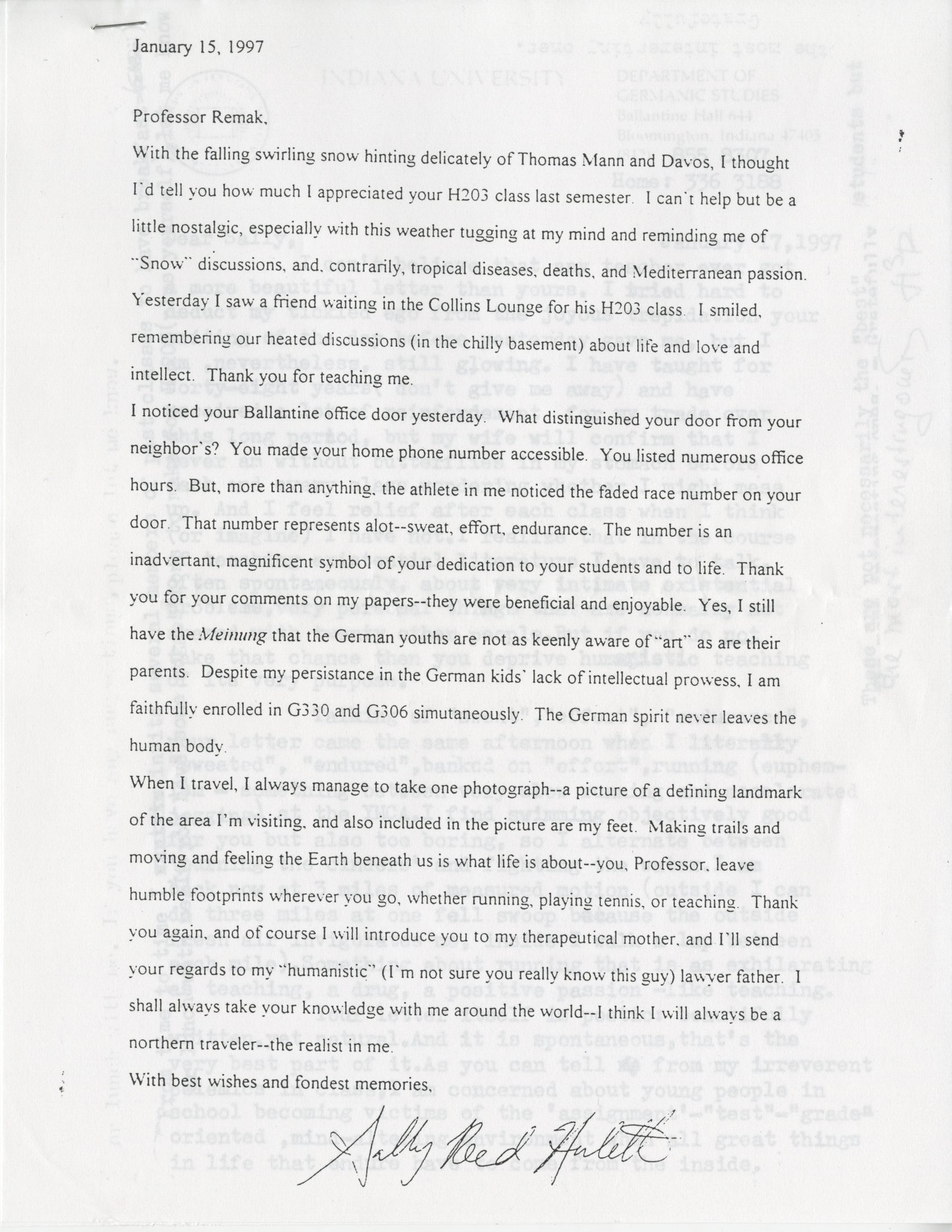 Letter from student. “Making trails and moving and feeling the Earth beneath us is what life is about–you, Professor, leave humble footprints wherever you go, whether running, playing tennis, or teaching.”

Remak’s correspondence: For Remak, writing correspondence was an art. Whether to current or former students, university faculty and administrators, or scholars from around the world, Remak’s letters were eloquent expressions of his keen wit, charm, and energetic personality. I was constantly impressed by the sheer effort that Remak placed into his relationships with others, as evidenced by his correspondence. The collection contains a plethora of student files filled with letters that trace the path of young undergraduates into their lives beyond school – getting jobs, having families, perhaps becoming professors themselves. Remak’s correspondence is also reflective of the many changes that have taken place at IU, and the individuals responsible for those changes, which brings me to my next highlight.

A glimpse into 68 years of IU’s history: From the year Remak completed his master’s degree in 1937, to his final year teaching in 2005 – Remak spent roughly 68 years of his life being involved with IU, in some form or another. That’s nearly 1/3 of the time that IU has existed as an institution. As such, this collection reveals much about IU’s history. To provide just a few examples, there are materials pertaining to Alfred Kinsey and the founding of the Kinsey Institute; correspondence and clippings on Bobby Knight’s controversial firing from IU; correspondence between Remak and Herman B Wells; and clippings, research notes, and course materials pertaining to Remak’s interest in the student revolts and faculty unrest of the 1960s and 1970s. Remak’s interest in the latter extended beyond IU to student revolts and faculty unrest in other parts of the United States and the world, bringing me to my next point.

The teaching and research files provide evidence that Remak continually brought the world to IU and IU to the world: Remak’s prodigious research and constant involvement in communities of both domestic and international scholars allowed him to educate generations of IUs students on a variety of global topics such as “Masterpieces of German Literature,” “The Age of Goethe,” “Franco-German Literary and Cultural Relations,” “Student Movements in Western Europe and the United States,” to name a few. The collection contains dozens of Remak’s course syllabi, lesson plans, and materials on these and other topics. In addition to bringing the world to IU, Remak also helped IU students make connections abroad. Files detailing Remak’s involvement with several study abroad programs are contained within the collection. Lastly, many of Remak’s research notes, monograph and article drafts, as well as conference presentation papers are available in this collection, serving as yet another example of Professor Remak’s dedication to his domestic and international scholarly communities.

It is obvious from the paper trail he left behind that Henry H. H. Remak was well-loved by just about everyone who had the pleasure of meeting him. Though I cannot count myself among those lucky enough to have met him in person, I feel like I have come to know him well. In me, Remak has gained yet another admirer, and I am sure that anyone else who has the chance to peruse this collection will be as easily charmed.

I would also like to take this opportunity to thank the wonderful staff at the Archives for making my time as a processor there an enjoyable and educational experience! In particular, Dina Kellams, who was my supervisor, and Phil Bantin both encouraged and assisted me in many ways while I had the pleasure of working for them.