“Dedicated to the Brave Men of Indiana – Who Loved Their  Country More Than Knowledge – More than Life.”

Curated by Library Science graduate students Allison Haack and Alessandro Meregaglia, the exhibit Indiana University and the Great War: Student, Professor, and Alumni Involvement in World War I is now on display in the IU Archives! 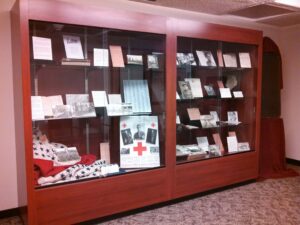 The entry of the United States into World War I on April 6, 1917, caused a rise in patriotism as people across the country sought to contribute to the war effort. The war had already been raging for nearly three years. Germany had resumed unrestricted submarine warfare on all US ships and the contents of the Zimmerman Telegram had became public. The Indiana University community was eager to do its part to contribute to the war effort and President Bryan urged, “Your first thought every day should be in what you can most effectively serve your country.”  In true Hoosier fashion, the students, faculty, and alumni rose admirably to the occasion.

By the fall semester of 1918, 60 percent of the student population had enlisted in the Student Army Training Corps and students, professors, and alumni were sent overseas.  Male students enrolled in new Military Science courses to prepare for enlistment or joined the Ambulance Corps and were sent to France. Female students and staff volunteered at the campus Red Cross Workshop and through other war relief organizations. The Indiana Daily Student kept those on the homefront informed about the progress of the war, especially news of current students and alumni who had enlisted or gone abroad with the Red Cross. 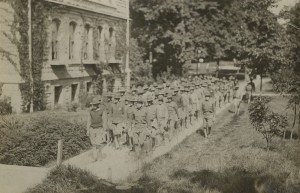 Members of the S.A.T.C. marching on campus. 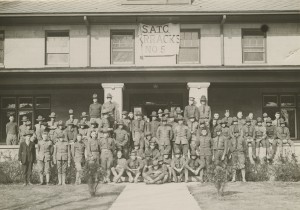 S.A.T.C. members outside of their barracks 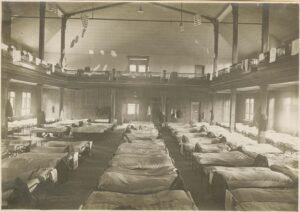 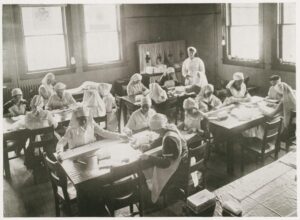 Women at work in the Red Cross Workshop; photo from the 1918 Arbutus

The exhibit highlights wartime contributions from the IU Community such as one of the founders of Kappa Alpha Psi Elder Watson Diggs (Lieutenant, 92nd African-American Division, alumni Horace Goff (30th Engineer Regiment (Gas and Flame) and William R. Ringer (S.A.T.C enlistee), and Ernest P. Bicknell (Red Cross Humanitarian), and faculty members Edna G. Henry (Social Services Work) and Georgia Finley (Dietician). It also looks at the role of the S.A.T.C., changes to the IU curriculum to prepare male students for military service, the 1918 influenza epidemic on campus, and the armistice celebrations in Bloomington.

Visit the IU Archives on the 4th floor of the West Tower in room E460!