In the 1940s Indiana University was gifted a diary that belonged to one of the university’s early students, John C. Wilson.

John entered Indiana University as a freshman in 1857 in pursuit of a Bachelor of Science. As a student in the Scientific Course, John was required to attend three recitations per day, and pass a public examination at the end of each semester. As the typical mode of instruction, a recitation is where the student is asked to publicly perform the material from memory with the intent to foster the “development of the intellectual and moral faculties, the formation of correct habits of thought and study, and the communication of useful knowledge” (Indiana University).

Admission to IU in 1857 was not too different from today. Students wishing to attend were required to procure “letters of honorable admission” from previous institutions and pass an examination or provide proof that sufficient studies have been completed prior to admittance. Before attending a recitation, a student was required to show evidence that all bills were paid.

Many students were involved in one of the two literary societies on campus: the Philomathean Society or the Athenian Society. These societies gave members practice in public speaking through debates and regular orations. John was a member of the Philomathean, which had meetings on Friday nights–some sessions lasting until the early morning hours.

In the 1850s, Indiana was becoming more populated, reaching 1,350,000 people by the 1860 census (U.S. Census Bureau). Several efforts at modernization can be seen during this time, and in his diary John mentions traveling by train at the end of the first session to his family in Sullivan, Indiana. 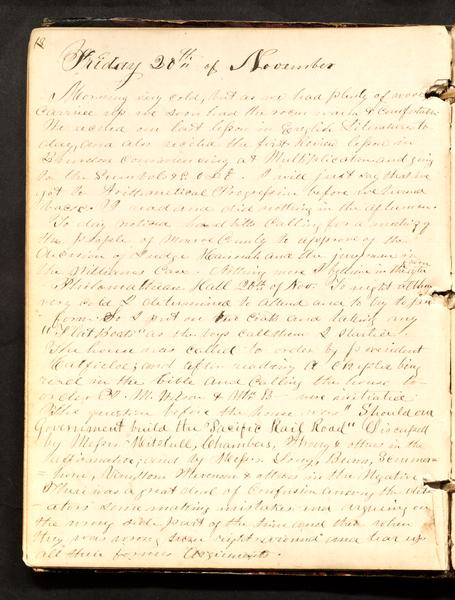 Excerpt from the diary that mentions the Philomathean Society.

Very little biographical information is known about John. The information we do have comes from his diary (which has been fully digitized and transcribed!), but curiosity and a desire to know more about John and his family prompted us to explore several resources to find out more. Our detective work proved fruitless, but here are a few of the resources we consulted:

As always, please contact Archives staff if you have any questions!

Catalogue for the Academic Year, MDCCCLVII-VIII. Indianapolis, IN.

U.S. Census Bureau. Resident Populations and Apportionment of the U.S. House of