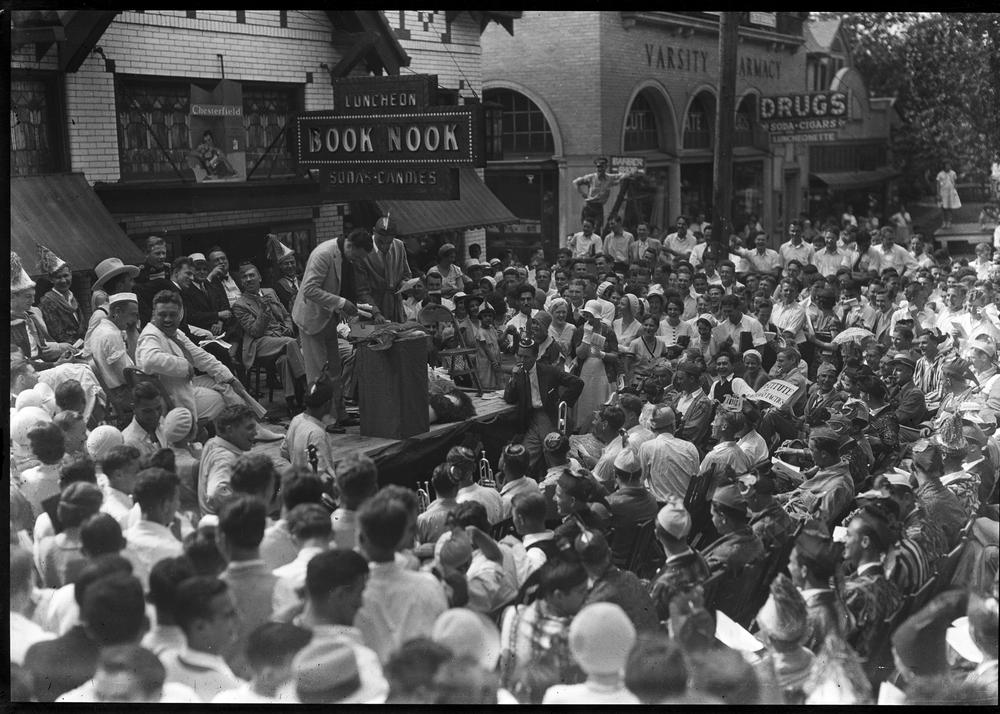 Herman B Wells, wearing a white suit, is sitting to the left of the podium at the front of the stage. Peter Costas is wearing a suit and standing at the podium, June 2, 1931. IU Archives P0022416

The Book Nook Commencement was a mock commencement ceremony that took place at the Book Nook, a popular student hangout in the 1920s located at Indiana and Kirkwood Avenue. A combination soda fountain and bookstore, the Book Nook was known for its music and the sometimes rowdy behavior of its customers. For many years the Book Nook played a significant role in Indiana University student culture. The 1924 Arbutus humorously makes this clear in their account of the University’s founding: “The university was founded on Foundation Day in the year 1820, by a band of pioneers who stopped their covered wagons in front of the Book Nook. Upon learning that it was Foundation Day and a holiday, the decided to celebrate and found a university. Where they found it no one knows.”

Notable IU alum musician and composer Hoagy Carmichael was a frequent patron, and it is said he composed his most famous songs, Stardust, at one of the Book Nook booths. In his autobiography, Sometimes I Wonder (1965), Carmichael described the Book Nook as, “a randy temple smelling of socks, wet slickers, vanilla flavoring, face powder, and unread books. Its dim lights, its scarred walls, its marked up booths, and unsteady tables made campus history.” (54)

Herman B Wells described a slightly less raucous establishment in his autobiography, Being Lucky (1980): “since there was not yet a union building or its equivalent, extracurricular activities centered in a campus hangout known as the Book Nook, later called the Gables. In my day it was the hub of all student activity; here student political action was plotted, organizations were formed, ideas and theories were exchanged among students from various disciplines and from different sections of the campus. For most of this period the Book Nook was presided over by something of a genius, Peter Costas, a young Greek immigrant who transformed a campus hangout into a remarkably fertile cultural and political breeding place in the manner of the famous English coffee houses. All in all it was a lively, exhilarating place.”

The first Book Nook Commencement was held in 1927 for William Moenkhaus, a contemporary and friend of Carmichael. Moenkhaus was a leader of a group of students who called themselves the “Bent Eagles,” known to spend a lot of time at the Book Nook. Carmichael was also a member of the “Bent Eagles,”; others included Bix Beiderbecke (cornetist), “Wad” Allen, Charles Bud Dant, and Ed Wolfe. Moenkhaus was often referred to as the “poet of Indiana Avenue” and was known to perform Dada poetry. When Moenkhaus was denied his diploma due to his refusal to take a required course on hygiene, the owners of the Book Nook George and Peter Costas worked with the Bent Eagles to put together the mock commencement. The Book Nook Commencement was certainly infused with the spirit of Dada; Moenkhaus delivered his speech wearing a bathrobe and holding a dead fish. “President” Peter Costas handed out degrees from the “College of Arts and Appliances.”

The Book Nook Commencements were increasingly elaborate productions, involving a parade from fraternity house to the Nook, absurd speeches, music, the conferring of fake degrees and diplomas, and “noise” by the “Book Nook Symphony Orchestra,” and “additional noise” by the “Concert Ya Book Nook Orchestra.” Students arrived attired in cone shaped hats and bathrobes. Some of the nonsensical degrees handed out included: Master of Hearts, Doctor of Physique, Doctor of Yell, Vociferatissimus, and Lord Mare of Hearts, Eroticus, Cum Laude. During the last Book Nook Commencement, Herman B Wells, then an instructor in economics, was presented with the degree “Doctor of Nookology.” Four Book Nook Commencement ceremonies were held, three between 1927-1929, and the last in 1931. In 1930, the Depression caused many students to drop out, and the mock commencement was cancelled. Although it was revived the next year, soon after the 1931 commencement the Depression again put a stop to the production.