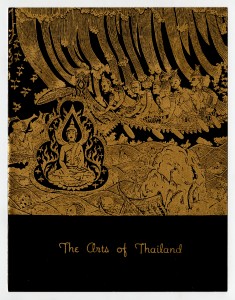 Program from a 1960 art exhibit at the Indiana University Art Museum entitled “The Arts of Thailand.”

When you think about a university situated in a small city in south-central Indiana, chances are, Thailand is the furthest thing from your mind. In actuality, Indiana University has close connections with Thailand dating all the way back to 1948 when President Herman B Wells met with Thai representative H E Mom Luang Pin Malakul, the Permanent Under Secretary for Education, in Bloomington to discuss education and development in Thailand. This involvement continued in 1955 when IU assisted with the development of Thammasat University in Bangkok, and continued with the establishment of the National Institute of Development Administration (NIDA) in Bangkok in 1966, the latter of which was administered by IU through MUCIA.

The Midwest Universities Consortium for International Activities, also known as MUCIA, was composed of representatives from several large Midwestern research institutions, including Indiana University, the University of Illinois, the University of Wisconsin, and Michigan State University. Indiana University provided two representatives, usually faculty members or administrators, and the IU president always served as Vice Chairman of the organization’s Council of Institutional Members. This consortium worked together to supply grants that would allow its member universities to build or assist in the leadership of academic institutions in developing countries with the goal of encouraging economic development and education abroad. Most of the MUCIA sponsored programs promoted the fields of education, government, business, economics, and public administration. 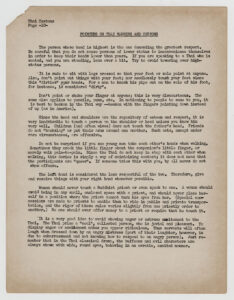 Page of a report from 1956 offering instruction and advice for interacting with Thai people.

These programs benefited the MUCIA member institutions by giving faculty and graduate students the opportunity to teach and conduct research abroad, thus strengthening their own academic programs. In fact, before becoming President of Indiana University, John Ryan traveled to Thailand as a Visiting Research Associate in 1956, co-authoring the monograph Administration of the Bangkok Municipality based on his research there. In addition to this item, the MUCIA records also include research and publications by scholars from Indiana University about Thai culture, including local government, institution building, agriculture, and family life.

Indiana University was a member of MUCIA from 1964 until the mid-1990s. As part of this consortium, IU’s most significant contribution was its involvement with the formation of NIDA. Funded by a grant from the Ford Foundation, NIDA was officially established on April 1, 1966 and included Schools of Public Administration, Business Administration, Development Economics, and Applied Statistics, all designed for graduate-level instruction. Although IU’s formal participation with NIDA ended in 1977 with the conclusion of the Ford grant, the university’s influence in Thailand continues to this day. Currently, NIDA has over 8,000 students, many of whom go on to become politicians, high-ranking government officials, and university educators in Thailand. In May 2012, Indiana University President Michael McRobbie took a trip to Thailand to meet with educational leaders, many of whom are NIDA graduates, to discuss the future of international education. While there, he also bestowed the Thomas Hart Benton Medallion to current NIDA President Dr. Sombat Thamrongthanyawong, further strengthening IU’s connection with Thailand. 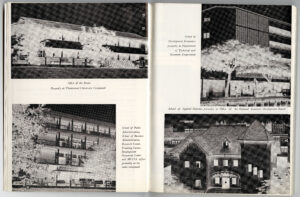 The National Institute of Development Administration (NIDA) campus at its opening in Bangkok, Thailand in 1966.