James E. Dobson, PhD ’14 recently defended his dissertation “The Awkward Age of Autobiography: Modernization, Temporality, and American Self-Representation, 1865-1914” in IU’s English Department. He teaches at Dartmouth College and works on intellectual history and American literature. He would like to thank the archivists and staff at the Indiana University Archives for their assistance in locating materials on the School of Letters.

The School of Letters

In 1951 a group of distinguished scholars gathered in the heat of the Bloomington summer for the first year of the School of Letters at Indiana University. These scholars were among the very best in the nation working on literature and literary criticism. They had been invited to Bloomington at the invitation of Indiana University President Herman B Wells. As the School of English, the program had been, for the three previous years, housed at Kenyon College in Gambier, Ohio, but financial difficulties required that another institution host the yearly summer institute. Over the next twenty years the School of Letters at Indiana University would be responsible for instituting major changes in the way that we read and talked about literature. The students and teachers participating in these annual institutes would use their time and proximity to each other and to resources like the Kinsey Institute during the summer months to conduct research and to produces theories that have utterly transformed our understanding of major literary works. 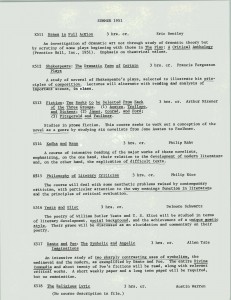 The School of Letters was initially organized and run by three senior fellows: John Crowe Ransom, F. O. Matthiessen, and Lionel Trilling. Some of these scholars participated in various degrees in a scholarly movement called “The New Criticism” and referred to themselves as the “new critics.” New Criticism was a revolt, begun almost a decade before the creation of the School of Letters, against the dominant reading methodology at the time that worked to place literary texts in their historical context, the historical time of authorship. The New Critics sought to shift the emphasis away from the biography and social circumstances of the author to an examination of literary aesthetics, the structural and formal features of a particular text. The famous literary journal run out of Kenyon College, The Kenyon Review, provided a platform for the articulation of the new critical credo and the School of Letters, a training ground for the dissemination of their views of the proper way to read and teach literary works to a new generation of scholars. The School was announced under the following description that made explicit the focus on the New Criticism: “The school is devoted to the critical analysis and evaluation of literature in the belief that such study has as much validity as a graduate discipline as the more frequently recognized historical scholarship, with its equally valid emphasis on textual, bibliographical, biographical sociological, and philological studies.”

The first summer session at Indiana ran from June 25 to August 3, 1951 and enrolled fifty-three students. The university decided to expand the program inherited from Kenyon by offering a graduate degree, a Master of Arts in literary criticism. This new and innovative degree program would bring students back to Bloomington for a second summer, provide a sense of continuity, and enable people with teaching appointments elsewhere to gain a graduate degree during the summer months. In addition to the M.A., the Graduate School made the School of Letters available to students as a Ph.D. minor, enabling those studying within a wide range of graduate departments at IU to have intimate contact with some of the best scholars working in literary studies. The innovation of the Ph.D. minor in literary criticism rendered the otherwise traditional departments cutting edge and attracted a great number of students to take up graduate study at Indiana University. In addition to course work, the Ph.D. Minor required taking an extemporaneous exam. The exam asked questions that required students to think in terms of the ideals of criticism taught at the School. In the early years, when formalist and aesthetic questions dominated the scene, students would be asked if a work of literature can adequately be “judged on purely literary (aesthetic) grounds” or if it was possible to give an allegorical reading of Robert Frost’s “Stopping by Woods on a Snowy Evening.” In addition to the courses that were available to registered students, the School of Letters also sponsored a series of public lectures—known as the “Evening Forum”—to be given by the visiting faculty fellows. These lectures proved to be very popular to the university community; some lecturers, such as Robert Lowell, Allen Tate, and Cleanth Brooks, were able to attract nearly two hundred audience members. John C. Ransom, one of the School of Letters organizers and among the first fellows.

After implementing these academic innovations, the School of Letters began to revise the content of the courses taught and issued an updated new mission statement. The announcement for the 1955 session revised and “corrected” the original mission statement inherited from the Kenyon days. While the School maintained its insistence that “the usual college and university courses in English have not discharged their responsibility for the art which is in their keeping,” the School recognized it could not be too dedicated to “some particular doctrine of criticism.” It now dedicated itself to representing “various modes of contemporary theory and practice” as applied to an increasingly diverse body of world literature. The School’s primary adherence to New Critical ideas helped continue the quiet revolution begun in these early summer sessions. Faculty and students came to Bloomington over the following two decades to learn and develop new theories and methodologies for the reading of literature.