This is a continuation of a post on the history of the IU School of Letters by guest blogger Dr. James E. Dobson of Dartmouth College.

Students and Teachers: The School’s Impact on Literary Studies

The impact of the School of Letters on the study of literature is hard to overstate. The School encouraged and promoted the work of scholars, poets, and critics including Richard Chase, Northrop Frye, Monroe Beardsley, Alfred Kazin, and Irving Howe. Perhaps one of the most influential scholars teaching at the School for many summers was Leslie Fiedler. 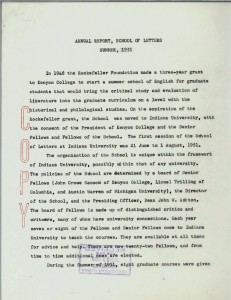 At the time of his first appointment to the School, Fiedler was working on what would become the manuscript for Love and Death in the American Novel (1960), a book of literary criticism that was one of the first to discuss certain recurring American social-psychological compulsions such as male homo-social bonding expressed in many American literary works. The preface to this famous volume notes the importance of his teaching and his students at the School of Letters in 1952 and 1954 for helping him to develop his ideas.

One of the students who encountered Fiedler’s radical critically transformative ideas at Indiana was James M. Cox, PhD ‘55, who would go one to become a significant American-literary scholar in his own right. In 1951 Cox was a graduate student at the University of Michigan and came to Bloomington for the summer to attend the School. It was his second year at the School; his first was spent in Ohio at the School of English. His experiences in the classroom with Fiedler led Cox to apply for admission to Indiana University. Quickly working through the course requirements for the Ph.D., Cox added the School of Letters as a minor and continued to take classes in the School of Letters. Cox would eventually himself become a fellow at the School of Letters, and after receiving his first permanent teaching job at Dartmouth College, he would return several times to teach classics of American literature including Mark Twain’s Adventures of Huckleberry Finn, Herman Melville’s Moby-Dick, and the works of Nathaniel Hawthorne. Martha Banta, PhD ’64 took a course on American literature under Cox in the summer of 1962 through the School of Letters while also obtaining a PhD minor in the School of Letters. She would write her dissertation on Henry James and author many important works of literary criticism. Both Banta and Cox would eventually receive lifetime achievement awards from the Modern Language Association and in their responses to the award they cite their time at the School of Letters as a major influential experience.

The poet and literary critic John Hollander PhD ’59 took his studies under School of Letters Senior Fellow Lionel Trilling at Columbia University to the English Department and the School of Letters, completing a PhD minor alongside James M. Cox. Hollander would go on to teach at City University of New York and Yale University. In 1961 Steven Marcus, a professor of Victorian literature at Columbia University came to Bloomington as a fellow of the School of Letters during which a chance encounter on campus launched him into a fundamental rethinking of Victorian culture and literature. Marcus describes this encounter in the preface to his highly influential critical work The Other Victorians (1966):

In the summer of 1961 I was teaching at the Indiana University School of Letters. It is a tradition at the School of Letters that each summer its several Fellows, or instructors, be conducted on a tour of the Institute for Sex Research. I was impressed by and interested in what I saw on this tour…I was invited to return to the Institute to conduct researches in its library and archives. These had largely been amassed by the prodigious energies of the Institute’s founder, the late Alfred C. Kinsey. They had also, I was told, gone largely unused and unexplored. It was the opinion of the Directors that the time had now come to begin to exploit this material, as it was also their belief that the time had now come to begin to open up the heretofore locked doors of the Institute, and to extend the use of its immense resources to scholars from other fields of study.

Marcus returned in to Bloomington in 1962 to teach for another summer session and continued the research that exposed a completely new account of the Victorian era’s concern with the centrality of sex. Prior to his groundbreaking book, this topic had been just as locked as the doors of the Kinsey archives.

The philosopher Stanley Cavell would come to lecture as part of the faculty in 1969 while researching a topic that would soon after be published as the well-received The Senses of Walden (1972), a radically new look at Henry David Thoreau’s Walden. Other important students of the School included Ihab Hassan, a theorist of what was then termed avant-garde literature, who was a summer student in the School and came back to teach during the summer of 1964; Mark Spilka M.A. ’53, who would later become chair of the English Department at Brown University and author of books on Virginia Woolf, Ernest Hemingway, and D. H. Lawrence. Among the School’s important critical participants, one must also cite Geoffrey Hartman. He attended the School in 1951 in its first year at Bloomington, and distinguished theorist of literature as well as member of the Department of English at Yale University.

The End of the School

Indiana University announced the end of its formal relationship with the School of Letters on July 28, 1972. The Director for almost the entirety of its twenty-year existence, Newton Stallknecht, gave as his reason the same budgetary difficulties that initially necessitated the move of the School from Kenyon to Indiana: “This action has been taken owing to grave budgetary problems which the University faces, along with many other schools of higher education.” With Stallknecht also eager to retire, Dean of the Graduate School George W. Wilson proposed closing the School of Letters. The other major reason given was that the program had become less popular—it granted only two or three M.A.’s per year in the last few years—ironically due to its success: the School, along with its students and faculty fellows, was ultimately instrumental in carrying out its goal to transform literary studies. Literature departments had come to embrace, in turn, both the New Criticism that was the founding raison d’être of the School and the catholic approach to literature that subsequently became the School’s enduring trademark. Despite its historical eclipse, this Indiana University-sponsored program constitutes a lurking precedent for the various kinds of institutionally concentrated literary-critical study that still take place to this day.

The Archives has a number of collections containing information on the School of Letters, including the Director’s records spanning 1947-1979. Contact the Archives for access or further information!