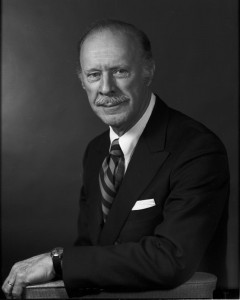 Several years ago, the papers of Dr. Lynton K. Caldwell were generously donated to the IU Archives.  We are pleased to announce that we have been fortunate enough to receive several more boxes of Caldwell’s papers! The additional materials provide a more in-depth look into the life work of this truly fascinating man. The revised finding aid for this collection can be found on the Archives website.

Dr. Caldwell was a longtime faculty member at Indiana University Bloomington who was known as the “grandfather of Biopolitics” and the “father of the political impact statement.” He is also credited as being one of the first people to use the word “environment” in the way we mean it today.

Although best remembered for his career while at Bloomington, Caldwell actually began his IU teaching career at the South Bend campus.  He worked there from 1939 through 1944, but came to Bloomington in 1965.  During his time at IU, he taught political science and public and environmental affairs, and was a leader in the establishment of the School of Public and Environmental Affairs (SPEA) in 1972.  Caldwell was the Arthur F. Bentley Chair and Professor of Political Science and and Professor of Public and Environmental Affairs. He retired from teaching in 1984, but remained highly active in environmental and public policy scholarship.

Caldwell was also a national leader and analyst of environmental policy.  Most famously, Caldwell was an instrumental member of the Senate committee that established the National Environmental Policy Act of 1969, or NEPA.  He was responsible for the idea of the environmental impact statement and was a principal author of the law.  In addition to his scholarly work, Caldwell wrote and delivered several reports and testimonies for the United States Congress, Senate, and various governmental departments. 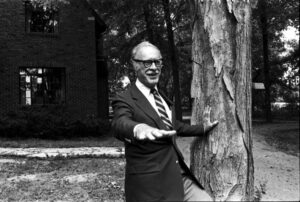 Dr. Caldwell was the author of numerous books, scholarly articles, introductions, forwards, and book reviews as well as serving as editor on multiple occasions.  Caldwell was best known in academic and government circles, but his works had a profound impact on environmental public policy in the United States as well as globally.  Some of his books include Between Two worlds: Science, the Environment Movement and Policy Choice (1992), In Defense of Earth (1972), and International Environmental Policy: Emergence and Dimensions (1984).