Marina Svetlova was born Yvette von Hartmann on May 3, 1922 to Russian parents in Paris, France. She began studying dance at a young age and debuted professionally as a 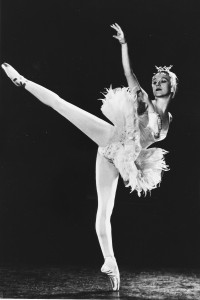 child performer in 1931 with the experimental dance troupe of Ida Rubinstein. While in Paris, Svetlova studied under Vera Trefilova, Lubov Egorova, and various other Russian emigres ballerinas. She became a soloist with the Original Ballet Russe de Monte Carlo in her late twenties, dancing with the company for three seasons. After leaving Ballet Russe, Svetlova came to the United States.

In the U.S. she danced as a guest artist with the American Ballet Theatre in New York City and as Prima Ballerina with the Metropolitan Opera Ballet for seven seasons from 1943-1950, leading the opera’s 1949 and 1950 tours. During this time, she created her own touring dance troupe, which flourished until 1969. In addition to her performance career, Svetlova was also a teacher and choreographer. She worked for the Southern Vermont Art Center from 1959-1964 before founding the Svetlova Dance Center in Dorset, VT in 1965, which she directed during the summers until 1995.

Svetlova joined the IU School of Music and its Ballet Department as a part-time instructor in the spring of 1970. By the fall, she was named department chair, a role she held until her retirement in 1992. Svetlova remained in Bloomington until her death on February 11, 2009.

The Archives holds a small collection of Svetlova’s papers that primarily documents her career as a performer. Included are a journal, performance programs, correspondence, news clippings, photographs, and scrapbooks. Contact the Archives for further information!