We are pleased to announce that there is now a finding aid available for IU’s renowned Russian and East European Studies Institute! A major research institute on the Bloomington campus, the REEI was proposed in 1957 based on a need to restructure and combine the existing departments of Slavic Studies, the East European Institute and Uralic/Asian Studies. The proposal indicated that the undergraduate programs would be discontinued and the institute would only award graduate certificates. 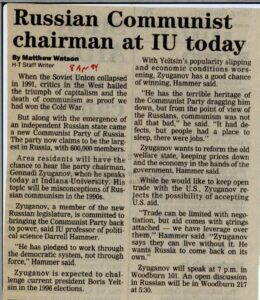 News clipping from 1994 concerning the visit of politician Gennadi Zyuganov

The Institute was officially established in 1958 and quickly became one of the top ranking international studies centers in the world. The Russian and East European Institute was the first area studies program at Indiana University and the first within the state of Indiana. At its inception, four departments formed the basis of the institute: Government, History, Slavics and Sociology.

In 1974, an undergraduate certificate program was initiated and in the 1980s, a Master of Arts program was approved for Russian and East European Studies. Students enrolled in the master’s program were required to complete courses in four related disciplines and have proficiency in a relevant language.

The Russian and East European Institute is a Title VI National Resource/FLAS Center and as a result the U.S. Department of Education is a major source of funding. In the 1980s, the Institute faced severe budget cuts from federal funding and was thus forced to pursue other sources of funding. The Ford, Mellon and Rockefeller foundations all provided substantial support for projects initiated through the institute.

An active institute on the Bloomington campus, the REEI has hosted many conferences, lectures and workshops. The institute still remains a leading Russian and East European area studies center in the United States. Over the decades the institute has grown and as of 2014, eighteen departments were affiliated with the institute.