More than 20 years ago, the Indiana University Center for Excellence in Education was committed to researching and developing an electronic textbook. They envisioned the device as “lightweight, clipboard-sized computers with built-in lessons, review drills, and data banks of reference materials.” In a time when computers were quite large and not mobile, the concept was radical and certainly before its time. The following representation depicts a typical work environment of the early 1990s: 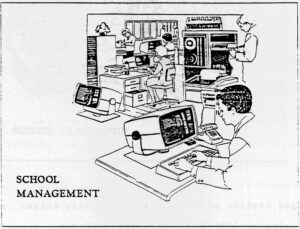 Computer technology in the early 1990s.

The monitors and computer towers occupied the space of an entire desk. Did technology advanced enough even exist for the researchers of the Center to develop the tablet-sized computers they envisioned? In actuality, yes. It was surprising to learn that tablets have been around since the early 1990s and conceived as early as the 1960s.

In 1992, the Center for Excellence in Education acknowledged the impact technology would have in the future: “The advantages of computer presentation are so great that we must accept that, in time, textbooks as we presently know them will largely be displaced.” Unfortunately, however, a tablet was not the result of any of its research projects. Instead, they worked to develop virtual textbooks using the technologies that were available at the time. The model, called Papyrus 2, was a hypermedia application that combined course content, instruction and support. The software package was built to allow students flexibility and encourage exploration when working through the course content.

Would you like more information about this and other related projects? Contact the Archives about access to the Indiana University Center for Excellence in Education records, Collection C550!