What’s the greatest risk you’ve ever taken? How old were you when you chose to take this risk? For pianist and Indiana University professor Menahem Pressler, one might argue that flying around the world to compete in an international piano competition was one of his greatest risks. From a young age Pressler was a natural player and chose to hone his skills as he grew older by attending the Tel Aviv Conservatory in Israel, where he and his family had emigrated to in 1939 from Germany to escape Nazi sentiments. After taking years of piano classes, Pressler decided he would enter into the Debussy International Piano Competition hosted in San Francisco, California. Luckily for him, his knowledge and talents supported him through the competition and Pressler won, marking his place in the world as a pianist and artist from that moment forward. 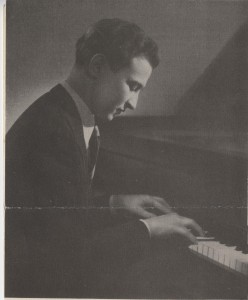 Menahem Pressler made his debut as a classical solo artist with the Philadelphia Orchestra only a few short weeks after winning the Debussy Competition. From there he has traveled the world performing solo, with his classical music ensemble the Beaux Arts Trio, and with other musicians and musical groups for over sixty-five years.

In 1955, Pressler accepted a position as a professor at Indiana University’s Jacobs School of Music. That same year, he performed with the Beaux Arts Trio for the first time, a classical chamber music group he co-founded with violinist Daniel Guilet and cellist Bernard Greenhouse. The Trio played their first concert at the Berkshire Music Festival (now known as Tanglewood) in Lenox, Massachusetts and continued to play together in different configurations with Pressler at the helm until 2008. 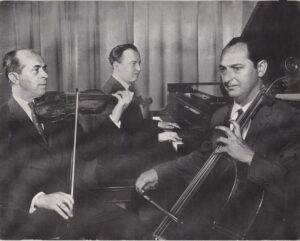 With a career as illustrious as Menahem Pressler’s, it comes as no surprise that the materials documenting his career is voluminous. Processing Professor Pressler’s collection was interesting for me as it helped me fully understand the breadth of his life and career, and how much of both he had dedicated to engaging the public with his talents. 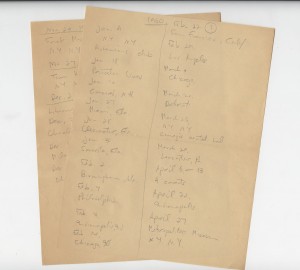 Although I knew Pressler was constantly in motion with either travel or teaching, I was delighted to come across an itinerary from 1960 that delineated the places and time spans of each concert he had that year. From Indianapolis to New York, London to Jerusalem, Pressler’s influence spanned the entire world twice over. Program booklets and clippings match up with the itinerary dates and show which selections the Trio and Pressler focused on during this time period.

One of the first concerts of the year took place on January 27 in Miami, Florida. The trio played a classic Haydn’s Trio No. 3 in C major before moving on to a more contemporary piece by Aaron Copland entitled Trio on Jewish Themes (“Vitebsk”). One of the group’s last concerts took place at The Library of Congress’s Coolidge Auditorium where they played pieces from Joseph Haydn, Georg Friedrich Händel, Maurice Ravel, and Hermann Zilcher.

An article published by The Scotsman on September 5, 1960 stated that, “If the old Italian craftsman [Stradivarius] could claim some credit for the refined yet ample tone which flowed from [their] instruments he would have rejoiced at finding his instruments in the hands of such masters, for each is a soloist in his own right.” Another article published just a few days later on September 7, 1960 by the Daily Telegraph and Morning Post stated, “The pivotal point is the pianist, Menahem Pressler. His greatest technical asset is his touch, which, at the command of intense musical understanding produces not only runs of unusual fluency and the realization of hypersensitive phrasing, but the power to hold clearly the shifting balance of the music between the instruments with never any loss of control or tone.” 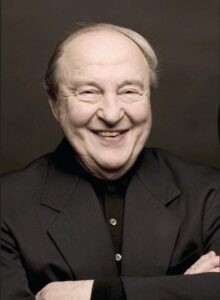 Accolades such as these continue up until this very day for the now 90 year old musician. Mr. Pressler has been the recipient of many influential and important awards such as the German President’s Cross of Merit, First Class (2005), France’s Order of the Arts and Letters (2005), and a Lifetime Achievement Award from The Edison Foundation (2009). None of these accomplishments could have been achieved without the daring choice to take a risk (an instructive example to us all).

The Pressler papers document his career as an artist and professor at Indiana University and are now processed with a finding aid available through the Archives. Contact the Archives for more information or to gain access to the papers! Additional information about Menahem Pressler may be found on his official website: http://menahempressler.org