IU Professor of Chemistry, Marvin Carmack, devoted most of his career to researching organosulfur chemistry, specifically Lithospermum Ruderale, the agent of fertility control used by the Native Americans. But during World War II, Dr. Carmack worked on contract with the National Defense Research Committee on high explosives and later on anti-malarial agents. Much of his attention during this period was focused on developing more efficient production methods for cyclonite (also known as RDX — Research Department explosive), an explosive more powerful than TNT. Given its power, the U.S. government approved the use of RDX in mines and torpedoes in the early 1940s. This created high demand for the explosive — a demand that couldn’t be met by existing reserves of RDX. This shortage led to the construction of the Wabash River Ordnance Works in Vermillion County, Indiana (north of Terre Haute). The E.I. du Pont de Nemours & Company ran the plant; Dr. Carmack also worked for du Pont later in his career. (The ordnance plant eventually became known as the Newport Chemical Depot and was used for chemical weapons storage for the rest of the twentieth century.) 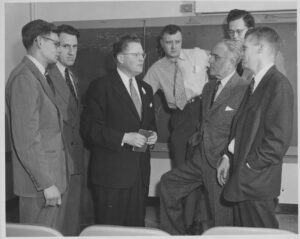 Dr. Marvin Carmack (third from left) talks with other chemists after delivering a lecture at du Pont Laboratories in 1952.

After his retirement, Dr. Carmack returned to researching RDX, this time focusing on George C. Hale, an Indiana University alumnus and scientist who was one of the first people to develop RDX during World War I. The fruits of that research turned into a lecture delivered to the American Chemical Society annual meeting in 1990. (All of Carmack’s research and drafts of his talk can be found in his papers.)

But professional research were not the extent of Dr. Carmack’s connections to RDX. They extended to the personal: Dr. Carmack, himself born and raised in Vermillion County, had ancestors who traveled to the area in 1830. The land his ancestors claimed eventually became the site of the Ordnance Plant one hundred years later. As Professor Carmack wrote to a friend in 1990, “Our family seemed to have a destiny with RDX!”

To read more about RDX or to learn about Dr. Carmack’s other research interests, correspondence, and teaching notes, visit the finding aid for the Marvin Carmack papers and contact the IU Archives for questions on access to the papers!