So this past week I had one of those moments at work where I was reminded that:

I was spending some time with the Library’s subscription of the NewspaperArchive (if you haven’t checked it out, you should. It’s a little clunky and seems to work best with Internet Explorer, but it’s full text searching of historical newspapers. You can hardly ask for more). In browsing through a January 1898 newspaper in search of an article about IU’s former Jordan Field, I spotted this: 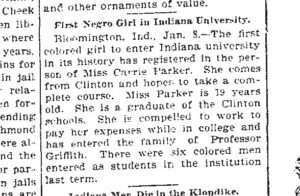 I contacted my friends at the Office of the Registrar who confirmed that Carrie did indeed matriculate January 4, 1898 and attended through Fall 1898. Wow. Okay, now to find see what else I could find out.

A bit more digging in the newspapers found a write-up about her graduation from Clinton High School, which names her as the first ever African American woman to graduate from a Vermillion county school. The article, titled “Colored Girl’s Triumph: She Overcomes Terrible Obstacles and Graduates With Distinction,” (June 4, 1897, Bedford Mail) covers nearly a full column and verily sings Parker’s praises:

She was the main object of interest in the graduating exercises. Her subject was “Home and Its Influence,” and when it came her time to speak she stepped to the front, cool and unembarrassed. She handled her subject with the skill and judgment of a professional lecturer, and it was the wonder of the audience how so young a girl could have learned so much on the practical affairs of life. She easily carried off the honors of her class, and the applause was hearty.”

The article continues, stating that after attending college (mistakenly stating she’d be going to Bloomington, Illinois), Parker intended to serve as a missionary to Africa. It closes with, “She has conquered the many and aggravating obstacles which confronted her during her unequal struggle in the Clinton schools, and her determination will make her a winner in the race for distinction which she now enters.”

Unfortunately, I was able to find very little about her year at IU and why she decided to leave. As with all students at the time, she had to find her own lodging since there was no University housing. According to the papers, she was to secure a room with Elmer E. Griffith of the English Department and his family. The wonderful librarians at the Monroe County Public Library’s Indiana Room scoured the local newspapers to see if there was anything new reported in the Bloomington papers but were unable to find anything more than an announcement that she had enrolled.

After striking out on locating additional information about her student days, I turned to the library’s subscription of Ancestry.com (that link comes with a warning: Time suck! Time suck! Time suck!) to see what I might learn about her time after Indiana University. It turns out she married John G. Taylor in 1899 in Bloomington and the 1900 census reports they were living in Fairfield, Indiana, where John was a laborer.

She remained married to John through most of her adult life and together they had six children. They moved around a bit, but stayed in the Midwest. Carrie was a homemaker and John held various jobs. The 1930 census has them living at 11261 Laflin in Chicago with their children and Carrie’s sister, who was a matron at a high school. John passed away and in 1937 Carrie married Richard Eaton (their marriage certificate reports he was a chef) in Michigan. 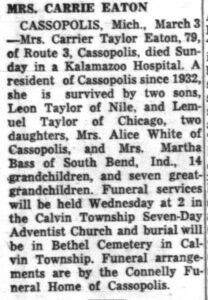 Carrie died a widow on March 2, 1958 in Kalamazoo, Michigan. Unfortunately, her obituary does not tell us much about her life. By this point, I’ve spent a good bit of time on the search and need to throw in the towel. I would love it if one of our readers could perhaps track down a family member and find out more about Carrie and her life (and could I possibly hope for a photo?) — and to make sure they know that Carrie was one of Indiana University’s pioneers.

I gathered together all of my research and loaded it to OneDrive. For further information, feel free to contact me directly at dmkellam@indiana.edu.