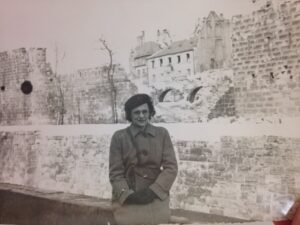 Faye Calvert Abrell attended Indiana University from the 1930s until 1941, receiving both her B.S. and M.S. in Education. Following her time as a student, Abrell landed a position teaching in the Dependents School Service in war-torn Frankfurt, Germany during the program’s earliest days, 1946-1947. The majority of the collection given to the Archives documents this year abroad and includes correspondence, photographs, scrapbooks she made and souvenirs she collected during this time. 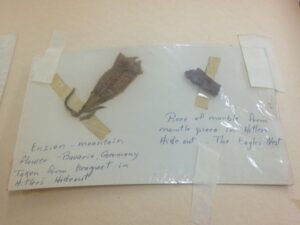 As a teacher for the Dependents School Service, Abrell spent the year in the American occupied zone of Germany teaching American children who had moved overseas with their parents. (their fathers were deployed officers). During her periods of leave from teaching, Abrell traveled around Europe sightseeing and visiting places such as Hitler’s home, also known as “The Eagle’s Nest.” Abrell was also able to attend some of the Nuremburg Trials while she was in Germany.

The photographs taken by Abrell document the resiliency of the German people to continue forward and rebuild after World War II. Abrell photographed the numerous bombed-out buildings and devastated countryside she witnessed during her year abroad. In fact, she described the apartment building she lived in during her time in Frankfurt as being “half-bombed away.” Not surprising, considering the destruction the city faced during the war. 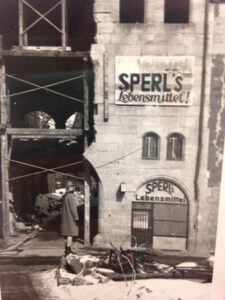 Abrell also created several scrapbooks incorporating the photographs, tickets, and souvenirs she collected while teaching and travelling in Europe. One of the most interesting finds (I thought!) is within the largest scrapbook. In it, Abrell pressed a flower she stated was from a bouquet on Hitler’s table and a piece of broken marble from his mantle piece. (We did a little research and not only is the marble is the same red as Hitler’s mantle but she also documented the visit in her journal, so we think it’s legit!)

Contact the IU Archives if you would like to learn more about this alumna and her papers and see a piece of Germany post-World War II!