The archive of a long-term ethnographic study of Hungarian ethnic identity is now available for perusal at University Archives and Records Management. The study, facilitated by Indiana University’s Folklore Institute in the early 1980s, examined the ways that Hungarians in both Hungary and the American Midwest maintained senses of community through everyday customs. This project led to an academic conference, a special issue of the Journal of Folklore Research, and a rich collection of photographs and fieldwork reports. And that’s where the official story starts to get personal, at least for me.

Sorting through the papers of the Hungarian-American project over the past couple of weeks was an exercise in self-reflection. As the research team documented ethnic foodways and days of religious observance among Hungarian culture groups, I recalled my own encounters with similar sorts of traditions during my childhood. My mother’s side of the family has always held on to certain pieces of its Slovak heritage, from the practice of Roman Catholicism to the hearty peasant food that characterizes our communal meals. Sauerkraut, sausage, and the sign of the cross are comfortable bedfellows in my mind.

In fairness to the academic persona that I’ve spent the past five years cultivating, this kind of musing makes me recoil a bit. Though they are neighbors, Hungary and Slovakia are distinct nations with distinct cultures. From a scholarly standpoint, it does not do to lump them together so indiscriminately. On the other hand, the human in me gravitates toward what I recognize as a resounding articulation of home. The people I grew up with behaved like the people whose lives are documented in the Hungarian-American project archive. It was impossible for me, while browsing these papers, not to be reminded of grandparents, aunts, and uncles. 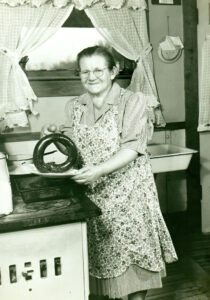 Here’s a case in point: My great-grandmother, Mary Slota, left Slovakia for northeast Ohio in the early twentieth century. One of my favorite family photos shows her in her kitchen, proudly displaying a ring of homemade hurka, or blood sausage, probably harvested from a hog that was raised on the small farm where she lived with my great-grandfather. One of the hundreds of photos in the Hungarian-American project archive shows a widow in the Hungarian village of Cserépfalu. Babushka tied around her head, she leans over a bowl while plucking a chicken, presumably in preparation for a meal. Captured in the photographic frame, both women illustrate the cultural moment they inhabit. They wear floral patterned aprons and work with ingredients that exemplify a farm-to-table attitude long before that phrase became trendy among the culinary elite. And while Mary Slota and the villager from Cserépfalu spoke different languages and lived in different places, their everyday lives were more like than unlike. 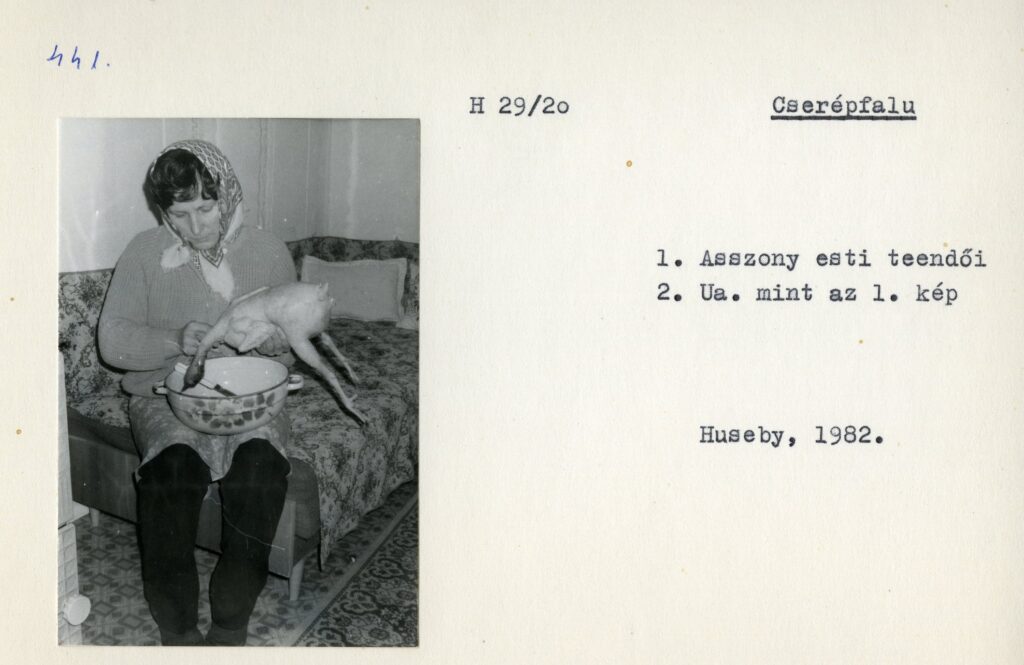 Villager from Cserépfalu, Hungary – from the Hungarian-American project archive

That the archival material of the Hungarian-American project speaks so insistently to my own experience is, in my opinion, an indication of its success. Project researchers mindfully collected images and words to produce a body of data that is greater than the sum of its parts. While the project’s focus was Hungarian ethnic identity, the amassed data recalls the larger experience of eastern and central Europeans in the twentieth century. One can come to this conclusion on a personal level, as I did with my photo comparison, but it is also possible to approach the issue conceptually. Apart from the photos, the Hungarian-American project archive contains many documents that attempt to analyze the immigrant experience. Here are some of the questions they pose: What does it mean to be “ethnic,” anyway? Are Hungarians only ethnic once they have left Hungary? Is culture something people inherit or something they create? What about tradition? Does it have to stay the same, or are we allowed to change it?

There isn’t enough space to describe the researchers’ conclusions here, but the good news is that six boxes of documents await anyone who wants to know more. To gain access, or to view the finding aid that indexes the Hungarian-American project archive, visit our website at http://libraries.iub.edu/archives, or call (812) 855-1127.