A few years ago, I was sitting at a wedding reception table that felt like it was a quarter mile from the bride and groom. Most receptions seem to have a few tables like this: co-workers, college roommates, and longtime babysitters who are special enough to have warranted an invitation, but who are probably seated too far away to tell whether the best man is having chicken or steak. The people at these tables often don’t know one another, making the conditions ideal for small talk. This was our case.

The guy next to me said he was an engineer. Dutifully, the rest of us asked about the details of his work. I forget what they were. What I remember, however, is this: When I later said I was a folklorist, the engineer went into hysterics. For a moment, I thought to be offended. Then I realized he was laughing because he had legitimately never heard the word before. He probably thought I was making it up. So I swallowed this particular grain of salt and ruminated for the umpteenth time on the smallness and relative obscurity of the discipline of folklore studies. (For the record, the word “engineer” isn’t exactly a model of linguistic normalcy. It’s pretty close to “mouseketeer,” as far as I’m concerned.) 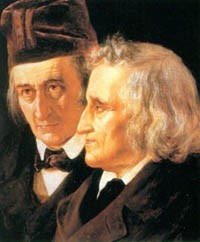 If I had the engineer in front of me today, I would tell him that he probably knows the names of two famous folklorists, and that he has probably known them since childhood. “Who?” he would ask incredulously. And with particularly Germanic aplomb, I would answer: “Have you ever heard of Jacob und Wilhelm Grimm?” The conversation would proceed from there, as I explain that the Brothers Grimm provided a template for the sort of work that many folklorists still do today. They identified traditional art in their own culture, sought out its experts, and collected material directly from them.

The point of this anecdote is to highlight a new resource for explaining the history of folklore studies in the United States and Germany.  IU’s University Archives and Records Management now makes available the archive of the German American Conference, which is shorthand for Folklore and Social Transformation: A Dialogue of German and American Folklorists, held November 1-3, 1988, at Indiana University. Organized by the Folklore Institute, the conference was an attempt to build a connection between scholars in the United States, where academic folklore studies are comparatively young, and scholars from Germany, where the discipline’s roots are deeper.

The conference accomplished two things. First, as any academic meeting does, it gave scholars a chance to present new research. Second, and more importantly in this case, it provided a venue to discuss the international folklore studies community. When scholars from different countries come together to discuss what they’re up to every day, the vibrancy and visibility of a given discipline are likely to increase. A practical result of this sort of collaboration is a more globally conscious academic. When armed with an international perspective, scholars get better at explaining their work within the academy–to colleagues in other disciplines, for example–and outside of it–say, to engineers who think the word “folklorist” is the neologism of the year.

The archive of the German American Conference is a direct line into what German and U.S. folklorists thought of their discipline in the late 1980s. Their presentations addressed the nature of folklore studies in a variety of social contexts. Anthropologist and folklorist Christoph Daxelmüller traced the history of German-Jewish folklore studies in the decades leading to the rise of the Third Reich. Folklorist Marta Weigle explained the role of folklore in creating and marketing images of the Southwestern United States during the years of westward expansion. Folklorist Elliott Oring examined the implication of folk expression in journalism, where objectivity, not creativity, is the common standard of success.

For three days in 1988, folklorists from two nations gathered to discuss these ideas. Conference organizers, mindful that the event should be collaborative, organized cross-cultural respondents for each paper. U.S. presenters got respondents from Germany, and German presenters got respondents from the U.S. This was an ultimately successful bid to ensure that international discourse would drive the meeting. As IU folklorist Richard Bauman summed up in a later piece of correspondence, everyone involved had “done gut.”

In fairness to the engineer from the wedding reception, a single conference held at Indiana University in 1988 does not change the visibility of folklore studies in any way that he or most people can see. But events like this go a long way in developing academic community. And when communities crystallize, inter-community connections become easier to develop. In other words, before we attempt to explain ourselves to others, we must first take steps to understand ourselves alone. Who are we? Where do we fit? What histories do we inhabit? These are heady questions, but perhaps they’re necessary for the group that wishes to establish a sense of identity, either locally or internationally.

The finding aid can be found in Archives Online. To view the archive of the German American Conference, email or call us at (812) 855-1127. We would be happy to assist!