It’s not that dropping to the floor in a spasm of joy upon receiving the Holy Spirit is wrong, exactly. It’s just that this doesn’t represent the entirety, or even the majority, of the Pentecostal faith. Such is the perspective of Joy Unspeakable, a documentary produced by the Indiana University Folklore Institute and Radio & Television Services in 1981. While the so-called holy rollers receive some attention in the film, the Pentecostal story is told mainly by members of the faith—many of whom wish to lift the perception of their religion as a collection of rural eccentrics. Describing the ecstatic state that some Pentecostals experience, one of the film’s subjects comments: “Some of them, maybe, did roll on the floor. And they called everybody, then, holy rollers. I didn’t like that.”

Through commentaries like this, Joy Unspeakable presents an insider’s portrait of a Pentecostal assembly in Bloomington, Indiana. The members of the church are collected, amiable people who seem to have little use for snakes and strychnine. Instead, they describe their religion as a series of daily joys experienced via shared worship in a tight-knit faith community. Women are a particular focus. The role of the female in church life is a major theme, and this is more often than not explained by female churchgoers themselves. The film is memorably bookended with commentary from an elderly woman who eloquently narrates her faith in an accent that captures the unique vocal cadence of southern Indiana. 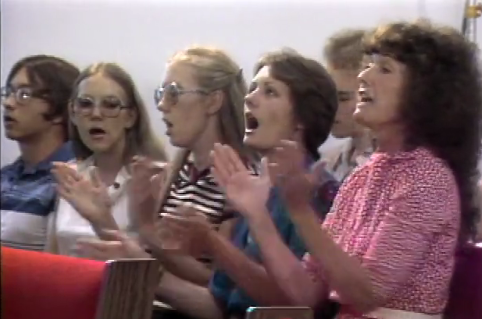 A still taken from Joy Unspeakable

University Archives and Records Management now makes available the administrative files for Joy Unspeakable. More than anything, these serve as something like DVD extras. Because the film is already available in full, for free, on the website Folkstreams, the papers of this collection are a chance to understand the filmmakers’ vision for the project. While it’s one thing to watch a movie, it’s another thing entirely to figure out how the producers want you to watch it.

The production techniques used for Joy Unspeakable are typical of ethnographic film, a genre in which the people onscreen determine the tone of the project as much as (or more than) the producers. Reading through the materials of this collection reveals that the filmmakers’ approach was rooted firmly in ethnographic soil. A remark in the project overview is illustrative: “The emphasis here is not on academics, but rather the community.” This bears out in the film, as voiceover is used only minimally, and members of the church take the lead on relating who they are and what it means to be part of their group.

After its release, the film became a touchstone for fostering public dialogue. Producers Elaine Lawless and Elizabeth “Betsy” Peterson arranged for local screenings before audiences of religious devotees and social service professionals. The latter group were invited to participate with the hope that an open discussion would allow them to better serve their Pentecostal clients. In a letter dated Sept. 18, 1980, Lawless and Peterson note that “our program has been designed with the aim of clarifying misconceptions and stereotypes about Pentecostals as well as providing a general overview of the religion.”

Both women were Folklore Institute graduate students when they completed Joy Unspeakable. In one way or another, their aims for the film—those of public outreach and community engagement—have carried forward into their careers. Lawless, an esteemed folklorist at the University of Missouri, recently completed an ethnographic film focusing on Pinhook, Missouri, where a federally-sanctioned flood displaced residents in 2011. Peterson, previously a consultant for folklife-related projects, is now the director of the American Folklife Center in Washington, D.C.

To access the archive of the Folklore Institute’s Joy Unspeakable project, visit the University Archives and Records Management website at http://libraries.iub.edu/archives, or call (812) 855-1127.