Charles Heiser was a Distinguished Professor Emeritus in the Botany Department from 1947-1986. He received his undergraduate and master’s degrees from Washington University in St. Louis in 1944, and his PhD from the University of California at Berkeley in 1947. Heiser joined the faculty at Indiana University in 1947 and was honored as a Guggenheim Fellow in 1953 and an NSF Postdoctoral Fellow in 1962.

During his professional career, Heiser served as president of the American Society of Plant Taxonomists, vice president of the Society for the Study of Evolution and as a council member for the Society of Economic Botany. Heiser was elected to the National Academy of Sciences, a prestigious distinction given only to the top scholars in the field. Other awards include the New York Botanical Garden’s Henry Allan Gleason Award and the American Society of Plant Taxonomists Asa Gray Award. 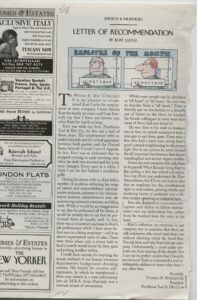 How to write a letter of recommendation

As a well-respected authority in the field, Heiser established a network of colleagues. Many of the files in this collection contain 40-50 years of correspondence with these peers. This length of time provides ample opportunity to share personal life stories. While the pieces of communication relate in some way to a research project, several close friends sent research of a different kind. “Fun” articles like the one on National Pun Week or the how-to article on writing a recommendation letter can breathe life into a collection of papers.

Heiser spent many years as a consultant for Tabasco, the pepper sauce company, conducting research on the variety of pepper used to make the sauce. The company was disputing a copyright issue with a Canadian company that marketed a similar sauce with a similar name. Ultimately, the dispute came down to the naming conventions for the varieties of capsicum, since there is a species commonly referred to as Tabasco. Heiser also worked to determine which countries could not grow the variety of pepper, and therefore possibly establish a trademark for the region.

The collection is filled with information on the unexpected uses of the plants Heiser studied. Gourds, for example, were sometimes used as penis sheaths or musical instruments. Boats can be made from totora. Capsicum could be used as a weapon. Other unique items in the collection include a box of seeds–mostly from gourds. One small canister contains numerous seeds from a tobacco plant–originating in 1657!

For further information on Dr. Heiser and his papers, please see the finding aid!