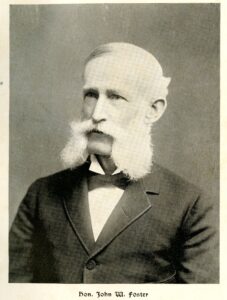 Often referred to as America’s “first professional diplomat,” John Watson Foster entered Indiana University in 1851.  Self described as a “bashful youth of fifteen,” he set out on a four-day journey by horse drawn buggy from his hometown of Evansville to the sleepy town of Bloomington. Foster reminisced later in life that “the only other boy in my town who was pursuing a regular college course was a student at Wabash College, and I was inclined to join him, but my father had a marked admiration for Dr. Andrew Wylie (IU’s first President) as a scholar and a citizen, and he felt that it would be of the greatest importance for my education and training to be under the influence of such as personality.” Sadly, Wylie died unexpectedly only weeks after Foster’s arrival.

Then home to only 88 students and 7 faculty, the university at the time only operated one small dormitory for students which is where Foster resided his first year. The remainder of students lived in boarding houses around town.  He described this “College Club” on the southwestern corner of the Seminary Square campus as 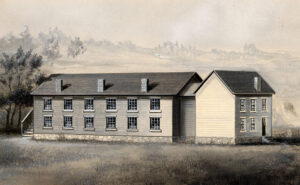 “a two story edifice, containing a central hall, a dining room, kitchen, and rooms to accommodate about twenty students, two occupying each room….It was a congenial company, except for one disturbing question, which created much debate at the monthly Club meetings when the menu was discussed and agreed upon. We were divided into the Coffee and the Anti-Coffee parties. The later was for excluding this exhilarating but hurtful beverage entirely. The injustice of such a policy was argued at great length, but was finally settled by taxing the coffee drinkers ten cents per week.”

Despite being few in number, undoubtedly the seven members of the faculty shaped and inspired the course of his career. He acknowledged that “The two most noted professors of my day were Professors T.A. Wylie and Daniel Read, the former for his lovable nature, unostentatious manner, and life long devotion to the interests of the University. The latter was of a very different temperament, vigorous and aggressive in his views, a lover of the classics, quite a politician not hesitating to teach his classes the democratic doctrine of free trade. Dr. Read more than any other of the professors impressed his personality upon my life.” Foster graduated with his B.A. in 1855 and M.A. in 1857, delivering the valedictory oration at commencement. He went on to study law at Harvard.

In the beginning stages of the Civil War, he joined the Union Army as Major of the 25th Indiana Volunteers under Ulysses S. Grant, moving up the ranks to become a Brigadier General. In 1864, he returned to his hometown of Evansville to serve as editor of The Evansville Journal and then as the town postmaster. In 1872 he became chairman of the Republican State Central Committee working to help re-elect President Grant (his former army commander). The following year he accepted an appointment from President Grant  to the post of American Minister to Mexico. Following a series of international posts in Russia and Spain, he withdrew from political office to practice law in Washington D.C. In 1892 he returned to service as the Secretary of State under President Benjamin Harrison and served until February 1893. For more on Foster’s career, see the U.S. Department of State’s biography.

In 1905, Foster returned to his alma mater as the recipient of an honorary LL.D. degree, accompanied by his 17 year old grandson John Foster Dulles who was at that time a freshman at Princeton University. Fifty years later, Dulles returned as the standing Secretary of State under President Eisenhower  to mark the 110th anniversary of his grandfather’s graduation and to deliver the University’s June 12, 1955 Commencement Address at the Baccalaureate Ceremony. Entitled “Patriotism,” his impassioned speech is still relevant today. 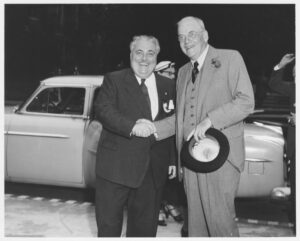 “It results that true patriotism, which vitalizes liberty and freedom for ourselves, can never be a purely selfish force. That has been ever evident so far as our nation was concerned. Our people have always been endowed with a sense of mission in the world. They have believed that it was their duty to help men everywhere to get the opportunity to be and to do what God designed. They saw a great prospect and were filled with a great purpose….These have been the characteristics of our nation since its foundation an those characteristics have persisted….We can take great pride in our nation because since the day of its creation, and with but few lapses, our purposes have been large and their goals have been humane.”

Since that time, other standing Secretaries of State to visit IU include Dean Rusk in November 1967 (more on that visit: http://go.iu.edu/dEc) and Warren Christopher, March 1995. Former Secretary of State Madeleine Albright visited more recently in 2011.

In 1963, the John W. Foster Quadrangle was named in his honor, while its six halls bear the names of five alumni and a Trustee, all outstanding contributers to the international field, including Walter Q. Gresham (B.A. 1897), Secretary of the Treasury under President Arthur and Secretary of State under Present Cleveland.

For more information about John Watson Foster (or any IU alumnus) contact the IU Archives.