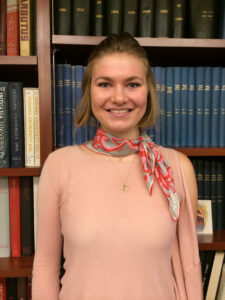 My name is Claire Repsholdt. I am an undergraduate majoring in English and History at IU. This summer, I had the honor of working with the IU Archives to select pieces for the exhibit “The Nature of Labor on a Changing Campus” that I curated as part of the College of Arts and Sciences Themester for the Scholars Commons in Wells Library.

Before I began this project, I had never had the chance to work in an archive. So, along the way, learning procedures for research were just as important as collecting materials for the exhibit. During the first meeting, I was excited to find out about the extensive materials in the IU Archives, which seems to include every memory of IU from students and staff, on campus and off. Furthermore Indiana is especially unique for having such an extensive digitized collection, which is largely available to the public for viewing. I highly suggest exploring it if you get a chance!

At first, when I thought about labor, I pictured industry, unions, and blue collar workers with names sewn into their jackets. However, as I learned about the other events sponsored by Themester, I quickly realized that you can find a story of labor everywhere you look. And since I was looking in the Indiana University Archives, there were millions of exciting options to choose from. I needed to narrow my focus. As I looked through materials, I couldn’t help but get excited when I found out new pieces of campus history, especially since it seems that this campus is currently undertaking an enormous period of change. With several new building projects in progress around campus, I hoped that I could use the archives to show some of the campus familiar landmarks in a new light. 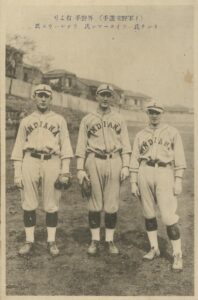 Selecting what materials to exhibit was, to use a classic labor analogy, like mining for gold. I delved deep into the comprehensive online Archives Photograph Collection and waited for a spark, an image that surprised me, moments when the IU community looked especially unusual or unique. Then I would sit down with what I’d found and ask the archivists for their suggestions. They guided me to rich pockets of materials like the beloved Leonard “Ruck” Ruckelshaus collection, which documents the baseball team’s trip to Japan in the 1920s (be sure to check out the I-Men’s sweater), or to the documents and ephemera of the now-defunct Home Economics department, which includes the personal correspondence and collections of Professor Elizabeth Sage. I was enchanted. I began to shape the exhibit’s narrative around these pieces, learning the careful preservation and presentation requirements that came along with them.

One of my personal favorite discoveries was a collection of photographs taken of staff from about 1949-1970. Only a fraction of the images made it into the exhibit–there were several pounds of folders full of prints–but by studying the collection as a whole I felt that I developed a much more intimate understanding of the story of labor on campus. The pictures were barely captioned, taken by some excited photographer who had access to a great portable camera, possibly for the first time. 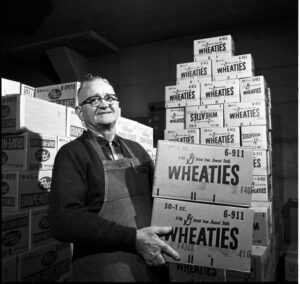 As I reviewed them, I imagined a young guy running around campus, shirt collar flapping in the wind, coercing workers into becoming the subjects of his picture and manically developing the prints for some important project that may or may not have ever been achieved, stacking them into the piles that moved from cabinet to cabinet and now fill the manila folders at the IU Archives. Those pictures became the heart of the exhibit for me. The photographer(s) were engaged in the same process I was, attempting to document labor on campus for posterity. In some way, my exhibit was just finishing what they had begun.

Though photograph research was an enormous part of the project, it was important to me to present a wide range of materials for the exhibit. I wanted to demonstrate not only what the IU Archives had available, but also to do justice to the experience of labor. I sought methods of displaying materials that would reflect the amount and variety of labor that occurs on campus and the way that labor is always in progress, moving through time. 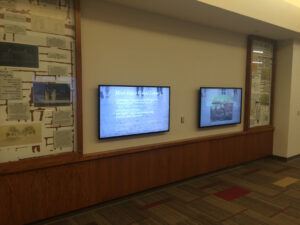 The exhibit space ended up being a crucial part of the concept of labor in progress, since it is a hallway: most of the visitors are just passing through. The exhibit had to react to constant motion. So, I chose to compose the exhibit within a simulated version of the Sample Gates, one of the most prominent centers of motion on campus. The background of each wall panel is a blown-up drawing of the Sample Gate pillars, and the slides on monitors in between the panels are images of pedestrians walking the cobblestone streets through the gates. Each of the monitors features films and moving text, encouraging viewers to imagine they are passing through the gates into campus as they imagine labor. As for the individual materials and captions in the exhibit, I tried to think of viewer interaction at all times, so that they could enjoy the same experience I did in the archives when I rediscovered campus through labor. 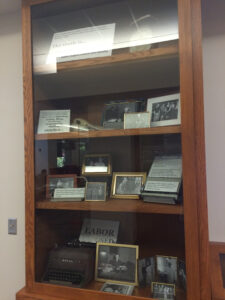 For the west wall of the exhibit, I acquired vintage office items from IU Surplus and picture frames from local thrift stores to create unique frames for the pieces from the Archives. I arranged the pictures and personal possessions of the featured laborers comfortably, the way they might be arranged on a family bookshelf, so they crowded together to take labor out of time, showing that even a historical presentation of pictures and accessories seemed at once familiar and historical, exhibit and display, past and present.

For the east wall, I represented the passage of time through labor by selecting various chronological renderings of both a location on campus, the Sample Gates, and campus as a whole in guided maps. I paired these chronological tours with facts and questions about labor. I hoped to call viewers’ attention to connect labor with time, showing how labor motivates change and pushes the campus to take action.

Both walls of the exhibit culminated in campus films featuring workers going about daily labor rather than sitting frozen in an exhibit. As a viewer notices a film, both the viewer and the exhibit are both on the move, passing through the space together in one group. Maybe for that one moment, there is no difference between being an archive and being alive. Everything is together, moving forward to change labor on campus.

It is my hope that the materials are provocative enough to interrupt the motions of students for a moment and ask them to recognize the labor that is a part of their daily campus routine. I hope that as they continue on their way to the computers or printers, they’ll look a little askance at the computer cubicles, pondering questions about where they are going, what work that they are doing, what technology they are using, and who is making it all possible.