Christopher Columbus has fallen from grace in recent decades. At issue is the explorer’s persistent prestige when his 1492 arrival in what is now the Bahamas spurred more conflict than cooperation. A variety of critics have addressed this concern. Native Americans publicly resist Columbus’ veneration at an annual protest in Denver. Humorist Matthew Inman suggests that we direct our attention away from Columbus and toward the Spanish cleric Bartolomé de las Casas, whose legacy is not tainted with violence. Coverage in other media outlets has begun to explore the growing support for “Indigenous Peoples’ Day” as a preferable alternative to Columbus Day. These criticisms are a far cry from the historical figure formerly most famous for having innocuously sailed the ocean blue. 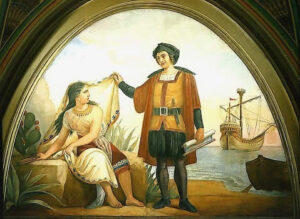 Columbus and the Indian Maiden by Constantino Brumidi – on display at the U.S. Capitol

The prevailing view here is that the Columbian landing marked the beginning of a dark time for indigenous people. It is curious, then, that the Indiana University Folklore Institute’s Columbian Project, a series of ethnographic studies undertaken in the late 1980s and early 1990s, was organized in conjunction with the 500th anniversary of Columbus’s voyage in 1992. It makes little sense that such a commemoration could be organized by a group of folklorists, whose work often focuses on the everyday artistic practices of marginalized populations.

However, the files of this project, which are now available for public inspection through the University Archives, reveal that the focus was less on Columbus himself and more on the cultural collision that his voyage symbolizes. What the folklorists who worked on the Columbian Project wished to discover were the artistic traditions that arrived as a part of the conquest. Despite the trouble that the Columbian landing brought, it also caused the sort of ethnic mixing that leads to folkloric innovation. Consider, for example, the mélange of French, Italian, Spanish, and African culinary traditions that is Cajun cuisine. A similar collaboration occurred with the conquest of the so-called New World. Along with martial force, European explorers also brought their artistic traditions, which then changed in accordance with the new environment.

The particular aim of the Columbian Project was to investigate the endurance of Spanish forms of folklore—specifically, of oral poetry—in those parts of the colonized world that were claimed by Spain. Even though the conquistadors arrived long ago, project researchers argued that their artistic legacy lived on in the late twentieth century. In an overview of his contribution to the project, folklorist and ethnomusicologist Ronald R. Smith states that the Spanish stanza known as the décima “still flourishes” in Panama. Similarly, anthropologist Judith Seeger notes that the romanceiro, a poetic form grounded in Spanish oral tradition, constitutes “living evidence” of continuing colonial influence in Brazil.

These notes suggest the durability of Spanish folk poetry in central and south America. They also get at the core of what many people think folklorists do: locate examples of really old artistic stuff, document it, and put it in a book. This is accurate to some extent. The volume of collected folklore is a venerable format. Yet a more common way of undertaking folklore research today is to do what the participants in the Columbian Project did: go to the field, find examples of really old artistic stuff, and consider how it has stayed the same over time—but also how it has changed. The idea of tradition pivots on this point. As much as it is fixed, it is fluid. In folklore studies, the arts that are most traditional are those that provide a direct link to the past while simultaneously mirroring their contemporary social context.

As such, the décimas and romanceiros of this project are not simply interesting anachronisms. They are creative incarnations of historical arts that, if they draw from the past, also fully inhabit the present. For example, Smith explains that although the words of the décima are slow to change over time, “there has grown a musical tradition that includes simultaneous vocal and instrumental improvisation.” The idea of fluid tradition takes hold here. What changes is paradoxically what stays the same.

The Columbian landing is a strange container for this sort of artistic growth. Imperious at best and murderous at worst, the colonization of the places that became the Americas is not typically remembered as a touchstone for artistic innovation. Nonetheless, folklore creeps into everyday life like ivy. Stubbornly and reliably, it finds purchase in times of war, peace, love, and hate. And upon close inspection, it can reveal that historical events are never of one meaning only. In this case, it could be argued that the colonized became the colonizers as they adapted the art forms of the conquistadors to suit their own traditions. They claimed ownership of the unfamiliar folklore that entered their lives, even if it did arrive as part of a cultural upheaval. This does not mitigate the damage done in the name of discovery. Nothing could. It does, on the other hand, represent a subtle protest, undertaken in an artistic framework, against a spurious claim of ownership.

To view the archive of the Folklore Institute’s Columbian Project, and to access the finding aid that indexes this material, visit our website at http://libraries.iub.edu/archives, or call (812) 855-1127.