(For Part 1 of this series from Archives Intern Jeannine, see: https://blogs.libraries.indiana.edu/iubarchives/2015/10/30/uehara1/)

The exploration of the Uehara correspondence continues.  I am currently about midway through the process of removing the documents from their containers and placing them into labeled 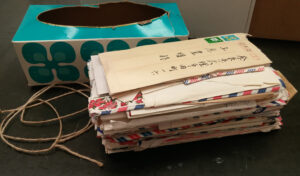 folders.  Upon release from their decades-long confinement, the stacks of letters swell slightly, as though they have been waiting to breathe.  The sheer volume of the materials is somewhat overwhelming – there are thousands of letters contained within the collection, each one of which will need to be unfolded and examined, but the end results will be worthwhile.  What I have uncovered so far has been interesting, informative, and sometimes even beautiful.  It truly is a time capsule of correspondence.

We have chosen to file the letters according to year in order to maintain original order as much as possible.  Though we cannot keep the materials in the tissue boxes we received them in due to conservation issues, retaining Mrs. Uehara’s filing “system” will allow us to retain something of their original context.  Also, filing according to correspondent would be very difficult for our staff, as more than 50% of the materials are written entirely in Japanese. 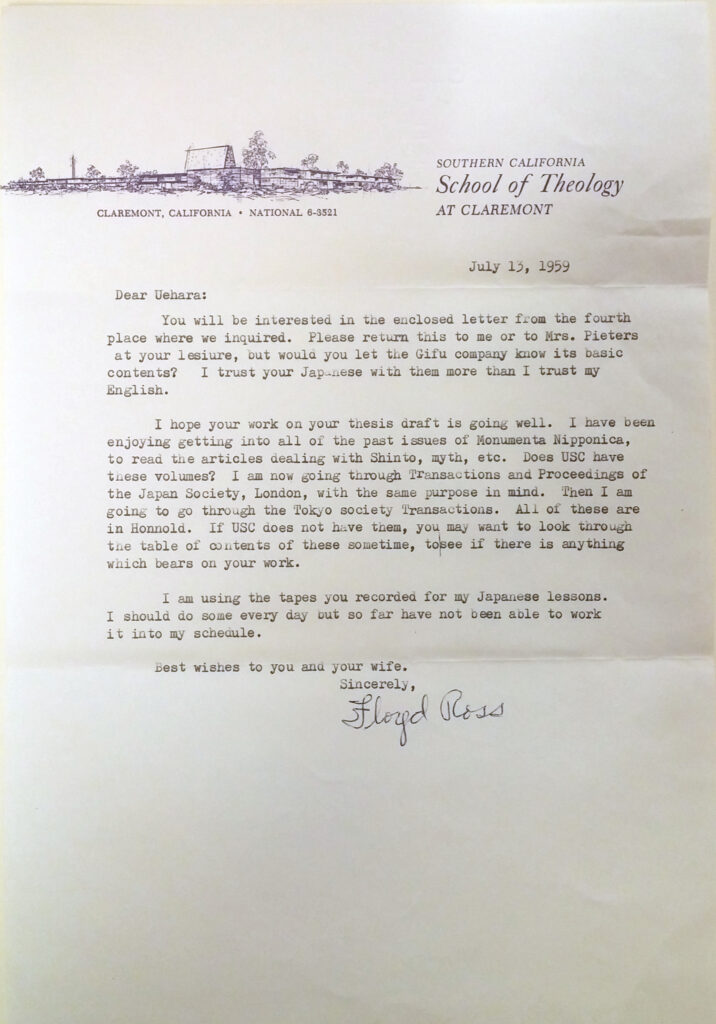 The types of correspondence Uehara received over the years is remarkably varied.  There are politely-worded notes from students dropping his language class or requesting letters of recommendation, letters inquiring about his health and family, postcards from travels, family photos, and even formal letters from the Japanese Consulate.  One frequent correspondent is Floyd H. Ross, professor of theology at the University of Southern California, who wrote to Uehara about various topics in religion and language. 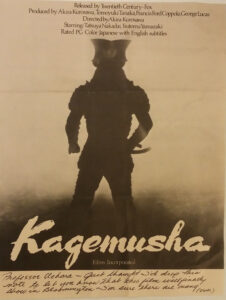 Standing out from the crowd are a few more personal or visual items, including a small paper poster of Kagemusha, a famed Akira Kurosawa film.  The poster was one of several forwarded to Uehara by an employee of a local film store to help promote the movie.  The note written on the poster begins: “Professor Uehara – Just thought I’d drop this note to let you know that this film will finally show in Bloomington.”  The film had come out a year before, and apparently staff and students alike were itching to see it!  With this item, as many others, there is little information given beyond the signature at the end of the note, which does not make it easy to find out who this person is or was and his relationship to Dr. Uehara.

When it is possible to identify a specific correspondent, it’s very exciting! Dr. Uehara received frequent letters discussing travels, teaching, research, and various other topics from someone who signed his missives simply as “Pete.”  Then, I hit gold in the form of a photo postcard.  Now some actual investigation! Far from 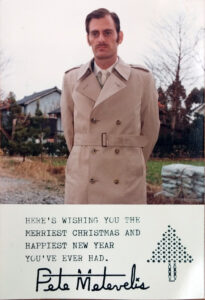 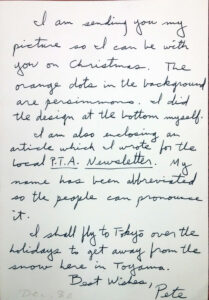 a faceless friend, Pete was Peter Metevelis – an exchange fellow, teacher, researcher, East Asian folklorist, and author of several books and articles about Japanese myth and culture.  In the postcard he mentions an article he had written, which unfortunately was not to be found in the collection, as well as his need to shorten his name so people from the local P.T.A. could pronounce it (first or last name, one wonders?).  It’s just so interesting to discover one of the real people behind these letters. 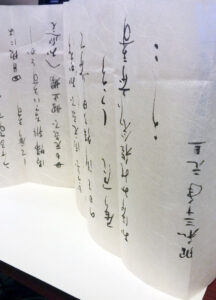 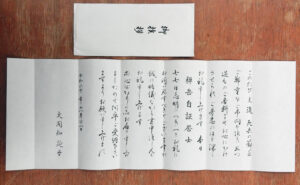 The letters in the Uehara collection come in an amazingly wide variety of shapes, textures, and sizes.  Among the oversized materials are several lovely hand-caligraphied “scrolls,” one over three feet long.

My work on the collection continues, so stay tuned!