At the Indiana University Folklore Institute, a copy of the Handbook of American Folklore can be found in most offices. Over the past five years of visiting faculty and staff as a graduate student, I could always spot it fairly quickly. Adorned with bright red text set on a jet black background, the spine and cover stand out among other books on the shelf.

Curiously enough, I have never read the Handbook from front to back. I don’t consider this a fault, though. This is the sort of book that defies linear inspection. There are sixty-eight short chapters within, and that doesn’t include the several introductory essays and headnotes. It is a handbook in the true sense of the word: written and organized for quick consultation by those who want brief synopses of the sorts of things that folklorists do, from common topics of research to strategies for publication.

The coordinating energy behind the Handbook was monumental, as I have recently learned. Thousands of documents exchanged between the late 1970s and early 1980s attest to the work it took to get this piece released. Those documents are accessible now, in the latest collection to be made available through University Archives and Records Management. Any interested party is invited to learn about the process—or the ordeal, some might say—that preceded the publication of the Handbook in 1983. 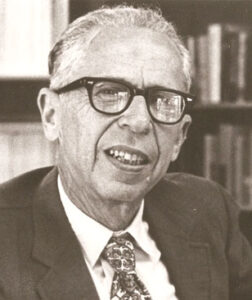 Originally scheduled to be a publication of McGraw-Hill, the Handbook was entrusted to the Indiana University Press after a change in management at the former company. With the publishing house secured, editors next faced the challenge of coordinating drafts, revisions, and payments among dozens of contributing authors. In the midst of these activities, the project faced its greatest setback—the death of lead editor and Folklore Institute luminary Richard M. Dorson. His passing on Sept. 11, 1981, created a major hurdle in the publication process, as well as a vacuum in the discipline of folklore studies at large. Known colloquially as the father of American folkloristics, Dorson’s career output included 24 books and 250 articles. In a piece of correspondence included in this collection, Handbook contributor Robert C. Toll described the gravity of the situation: “Dick’s passing is a great loss. It is fitting that this project, which would not have gotten off the ground without the force of his intellect, vision, and persuasion, be completed and published.”

That the Handbook rests on so many bookshelves today is a testament to the dedication of the remaining editorial staff. Without the commitment of Associate Editor Inta Gale Carpenter and Assistant Editors Elizabeth Peterson and Angela Maniak, the project would have stalled. It is something of a letdown, then, that when the Handbook was finally released, it was met with mixed reviews. For each compliment that the volume received, it also seemed to endure a criticism. In a 1984 issue of the journal Ethnomusicology, reviewer James Porter lauds the volume’s “expert topic résumés by accomplished professionals,” but he also notes that “this disappointing book could have been saved, one feels, by greater attention to depth.”

As a folklorist, I feel a defensive pang at these words, but it is not necessarily a defense of the Handbook itself. It is more a defense of Dorson, whose influence pervades life at the Folklore Institute even 33 years after his death. Maybe because we are folklorists and not accountants or chemists, we tend to recognize his impact in commemorative, almost totemic terms. Each year, two graduate students receive a prize in Dorson’s name, either for excellence in scholarship or to support fieldwork excursions. Similarly, the annual Richard M. Dorson Memorial Folklore Lecture brings a distinguished folklorist to campus for a formal lecture and, usually, a number of informal talks and meetings. Dorson’s gravitas also persists away from university officialdom. Some faculty and staff have suggested that his spirit still resides in the department where he spent so much of his professional life.

The Handbook fits into this mix as a tangible reminder of Dorson’s accomplishments, and it is made more potent because he passed away before it was finished. The criticisms of the book are reasonable. They are also probably prescient, given the disciplinary wherewithal that it takes to write an academic book review like the one quoted above. It is hard to swallow the criticism from a personal standpoint, however, because the book serves as Dorson’s swansong. For better or worse, the Handbook punctuated a career during which folklore studies turned from an intellectual aside to a viable academic discipline, in no small way because of Dorson’s sheer force of will. Many disciplines benefit from near-legendary scholars like this. Their devotion is total, and their ambition seems to know no bounds. The point I want to make here is simply that Dorson is our legend, and this book is his farewell.

To access the archive of the Folklore Institute’s Handbook of American Folklore project, visit the University Archives and Records Management website at http://libraries.iub.edu/archives, or call (812) 855-1127.