Kathleen McKee Butts was born June 7th, 1900.  She attended Shortridge High School in Indianapolis, where she was a staff member for the school’s Daily Echo newspaper.  Well-liked and relatively popular, she had an early interest in reporting and writing that followed into her college career.  After graduating high school in 1918 with an unprecedented number of credits she enrolled at Indiana University at Bloomington, majoring in English and minoring in Journalism.  She attended from 1918-1921, and though she did not complete her degree she worked as a reporter for the Indiana Daily Student until 1921.  On May 24, 1922 McKee married Albert W. Butts in Marion County, Indiana.  After that point she worked for several advertising agencies and publishers in 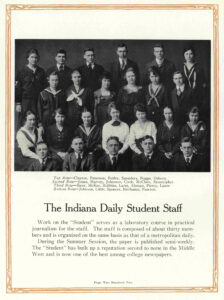 Indiana and Washington, D.C., and wrote editorials for Plainfield, Indiana’s Plainfield Messenger in 1934.  She wrote a number of stories and radio scripts, some of which were submitted for publication but not picked up.  Kathleen wrote under several pseudonyms, including Kay McKee, K. Wesley Butts, and McKee Butts, though it is unclear to us how many of her stories and radio programs ever reached the public.

The available story of Kathleen’s life is limited, and told mostly through letters, newspaper clippings, and notes kept by her father between 1902 and 1944.  Her parents, Dr. Joseph Fennell McKee and Irene Sullivan McKee, divorced messily in May of 1904.  The divorce grew into a long, drawn-out legal battle with accusations of child cruelty, kidnapping and neglect on both sides, with Irene first returning to live with her father John E. Sullivan and eventually leaving Indiana for Louisville, Kentucky.  A further legal battle between Dr. McKee and Mr. Sullivan regarding the theft of business documents caused further divisiveness.  The media of the time seem to have reported every controversial detail surrounding their numerous court cases, though the truthfulness of some of the accusations is uncertain.  J. F. McKee fought unsuccessfully for years to gain full custody of Kathleen, though he eventually succeeded in achieving custody for a few months of each year.  Ultimately McKee grew estranged from Kathleen, losing contact with her altogether.  During the 1940s, anticipating his death, Dr. McKee attempted to reconnect with her, corresponding with a number of individuals and attorneys in attempt to locate his daughter and her husband.  He wrote a letter in an attempt to reach Kathleen on October 22, 1943 with an incomplete address of Hotsprings, Arkansas, which was returned unclaimed.  It is unclear if she ever reconnected with her father before he passed away.

There are decades of time almost entirely undocumented, with only hints as to her activities.  She moved quite a bit, living and working in Indiana, Illinois, Missouri, Arkansas and Washington, D.C. Her husband grew ill and passed away sometime before 1934, and she does not appear to have had any children, as the 1940 census lists her as widowed and living alone.  After a time of failing health in which she stayed at the Mar-Salle Convalescent Center in Washington,  D.C., she was assigned a ward to care for her in her final months.  She died in July 1977, and the materials in this collection were held by her friend and neighbor Benita Kaplan before being donated to the Archives in 2015. A finding aid is now available for the materials and those interested in accessing the papers should contact the Archives.