Although you many not know Jean-Paul Darriau’s name, if you live in Bloomington, you have likely seen his work.

Darriau, Associate Professor of Sculpture at IU from 1961-1996, earned his Master of Fine Arts at the University of Minnesota in 1954. He received two Fulbright grants, which allowed him to spend two years working in bronze casting techniques at the Istituto d’Arte in Florence and the Guastini Foundry in Pistoria. During his career, his work was presented nationally and internationally at museums such as the Guggenheim Museum and the Joseph Hirschorn Collection in Washington, D.C. Several of those repositories, including the Indiana University Art Museum, retain examples of his sculpture as part of their permanent collections.

Today, Darriau’s art remains on display in Bloomington. Cast in bronze in 1965, “The Space Between: Adam and Eve” (seen below) is situated at the edge of Dunn Woods just behind Kirkwood Hall on the IU campus.  In May 2011, a storm with severe winds damaged both figures. Their pedestals shifted, and a fallen tree limb caused a dent in Adam’s head. The figures were restored in 2012. 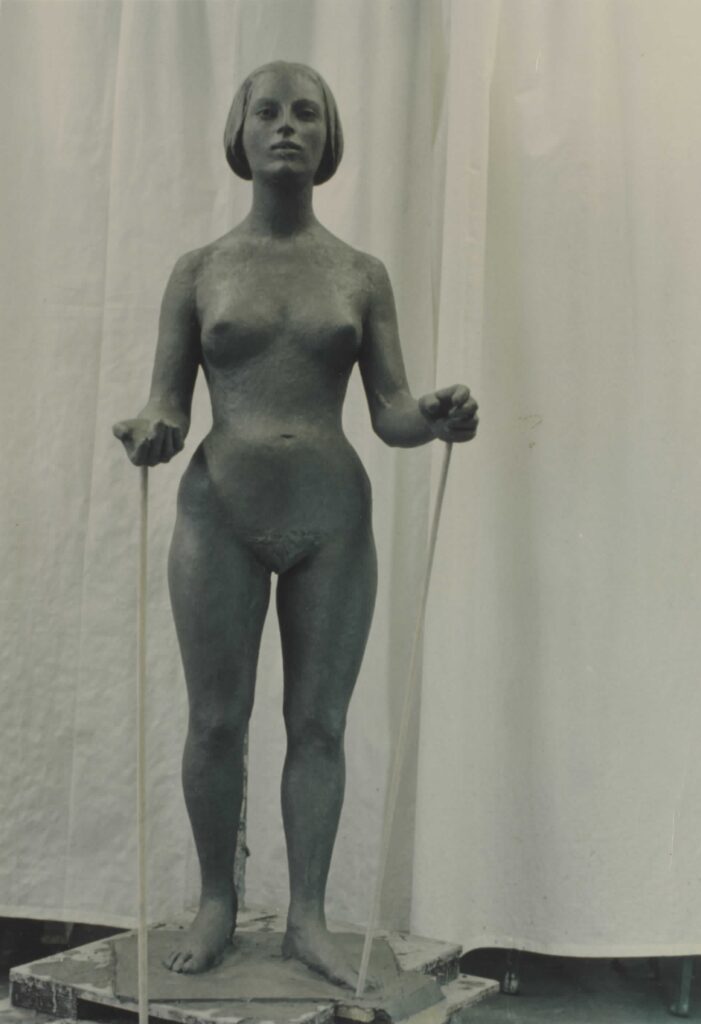 Titled “The Space Between: Adam and Eve,” the sculptures are located on IU’s Bloomington campus. 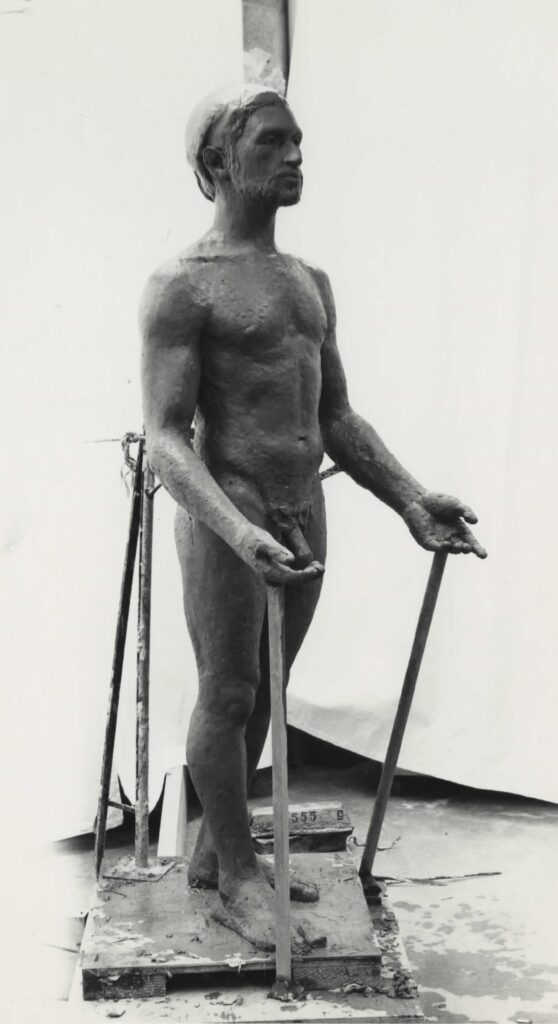 Clay model of “Adam” and “Eve” before being cast into bronze.

A second piece “Red, Blond, Black, and Olive,” consisting of two 11-ton slabs of limestone carved with faces depicting the racial diversity in Bloomington, resides on the city’s Northside in Miller-Showers Park. 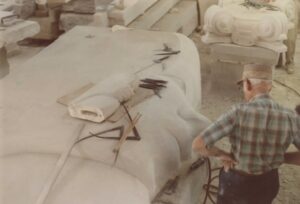 According to the City of Bloomington, the sculpture was chosen through a competition judged by a committee of artists, businessmen, Bloomington citizens and Mayor Francis X. McCloskey. It is considered the initial achievement of Bloomington’s Community Arts Commission. After being situated in the center of Miller-Showers Park for 22 years, “Red, Blonde, Black and Olive” was relocated to its current plaza in 2002.

The City’s website explains the significance of the piece: 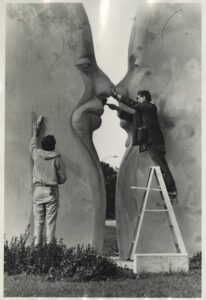 The finishing touches are added to sculpture, which today sits at the north end of Miller-Showers Park in Bloomington.

Aptly representing the diverse population of Bloomington, the two statues have four faces between them. Each face features a different major world race. Viewed from one side, the faces of an Asiatic woman and African woman stare at each other. An Indian man and Nordic man are face-to-face on the other side. The piece is meant to promote and celebrate communication across racial lines, and work towards universal understanding among people. The gap between the two columns is as important as the faces themselves. It is the space where conversation takes place, people come together and truths are revealed.

Darriau’s papers, housed in the University Archives, contain his published articles and correspondence as well as two boxes of photographs and slides with extensive images documenting his work, exhibitions, as well as his travels. All of the photographs in this post come from the collection.