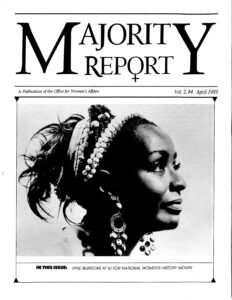 The Office for Women’s Affairs (OWA) was established on August 15, 1972 in response to the growing awareness of discrimination against women in the academic community. Bloomington Chancellor Byrum E. Carter stated that the OWA’s purpose was to “establish a climate in which women faculty, students, and staff are provided with full opportunities for the development of their abilities.” One of the greatest responsibilities of the OWA was to advocate on behalf of women and other IU community members who felt discriminated against.

OWA’s first dean was Eva Kagan-Kans, a professor of Slavic Languages and Literature. During her post from 1972-1975, her function, she stated, was to be an “ombudswoman,” investigating specific grievances, reviewing salaries and budgets for gender discrimination, examining access to research opportunities in graduate program, and redressing the underrepresentation of women at the faculty and administrative levels. Kagan-Kans also counseled undergraduates on future career choices at both the college and high school levels.  Jessie Lavan-Kerr, a professor of Art Education, served as OWA’s second dean. In 1976, while noting the “foundational inroads” the OWA made under the leadership of Kagan-Kans, Lavan-Kerr specified a need for “redefinition” of the office, gearing it to more “action-oriented directives” regarding equal opportunities for women faculty, students, and staff. Lavan-Kerr was dean from 1975 until 1979. 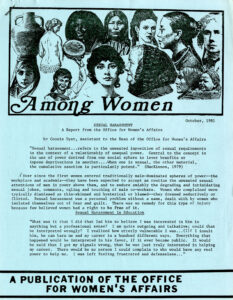 OWA’s third dean, D’ann Campbell, was an assistant (later associate) professor of History and an adjunct associate of Women’s Studies. Campbell saw her job as an “advocate.” OWA’s function, she stated, lay in “coordinating, funneling, and being a catalyst for a lot of projects to enhance the status of women on campus. We’re the affirmative side of Affirmative Action. We don’t wait until something falls apart. We can be sensitive to areas in which there are potential problems.” Under Campbell’s leadership, OWA oversaw the development of such projects as creating a videotape dealing with sexual harassment on campus (the first of its kind in the country), addressing the lack of female social networks in graduate school, and conferences to integrate women’s history into standard course work (80% of Western Civilization and American History courses never mentioned women in either books or lectures). Campbell was dean of OWA from 1979 until 1985. In 1985, Nancy Brooks succeeded Campbell, serving as interim director. 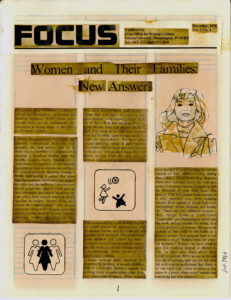 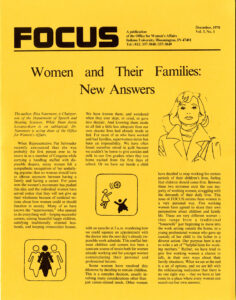 The Collection of OWA records housed at the University Archives contains flyers, correspondence, advertisements, grant information, mentor-mentee program information, data on reports, and surveys of students, faculty, and staff members at Indiana University. All matters pertaining to the OWA are now handled by the Office of the Dean of Students (for student concerns) or the Provost’s office (for staff and faculty concerns). The Collection has been updated with newly acquired materials and is open for research. Contact the IU Archives for more information.