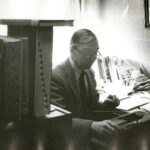 Charles Rush Forker, late Professor Emeritus of English at Indiana University, was born on March 11, 1927 in Pittsburgh, Pennsylvania.  The eldest son of Edson W. and Mary Rush Forker, Charles received his early education at Western Reserve Academy in Hudson, Ohio.  After his graduation in 1945, Forker was quickly drafted into the U.S. Army, near the close of the Second World War.  He served two years in the army as a medical corpsman.  Upon leaving the military in 1947, Forker enrolled in Bowdoin College where he studied Shakespeare and acted in plays as a member of the college-affiliated dramatic society.  Upon his graduation in 1951 (and induction into Phi Beta Kappa), Forker was selected as a recipient of a Fulbright grant to study at Oxford University in Great Britain.  He received a second B.A. there in 1953, remaining at Oxford under a graduate fellowship from Harvard University.  He received an M.A. from Oxford in 1955.  He soon returned to the United States to continue his doctoral studies at Harvard University and received his doctorate there in 1957. 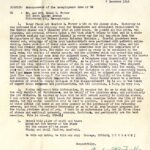 Imitating a typical letter home to the families of ill soldiers, young Forker comically writes to his parents of the unfortunate news of his cancelled trip home for Christmas and his seemingly unstable state of mind brought on by such news.

As a scholar, Forker would undoubtedly be most proud of the contributions he made to his field.  However, some of his most significant and touching writings are unpublished.  Like many soldiers, while he was stationed in Germany Forker wrote regular letters to his family.  These letters reveal the trials of a young man turned soldier.  He was eighteen when he was drafted into the United States military and was disheartened by the monotony of soldier life.  Reading his letters it is clear that he liked to keep busy.  He enjoyed a challenge, and it did not seem the military could stimulate his mind to the extent that he needed.  His letters home offered him a space to escape with the people who knew him best.  Young Forker provided his family with detailed accounts of the atmosphere in Germany and the futility of war.  He could see the beauty beneath the rubble and wrote about it.  And, just as any young person would do, he asked his family to send candies and cookies, wrote about his time at the hospital, and sent postcards from his trips around Europe.  It is easy to say that he fell in love with all things England while he was abroad and carried that love with him back to the States.  He was a perpetual student and shared his passion for culture with those around him during his lifetime.  In a profile about him in the English Department’s newsletter Footnotes in 1980, the author seemed to perfectly capture Forker’s character: “Writing essays, reading plays, whipping up a bearnaise sauce, listening to Mozart, teaching classes, swimming…Charles Forker is a Renaissance man, indeed.”

Charles Forker’s papers consisting of correspondence, research, teaching files, and publications spanning 1937-2013 are housed at the IU Archives. A finding aid is now available at http://purl.dlib.indiana.edu/iudl/findingaids/archives/InU-Ar-VAD4226. Contact the Archives for further information! 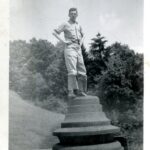 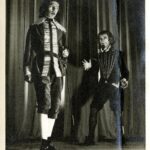 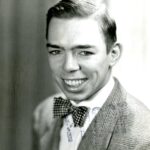 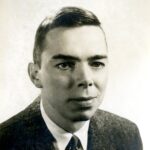 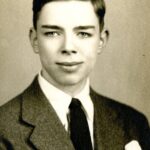 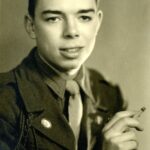