The archive of an unfunded project is a strange thing to behold. It recounts a set of best-laid plans that never quite came to fruition. Proposals and correspondence describe the viability of an enterprise, and organizers explain themselves with eloquently written prose and carefully curated documentation. In the present, we review these files knowing the inevitable outcome. Although many people worked hard trying to bring their idea to life, it did not succeed in the way it was envisioned.

A case in point here is the Ventriloquism Project, a proposed collaboration of the Indiana University Folklore Institute and Radio and Television Services. For much of 1988, a small but committed core of researchers sought funding for a documentary that would have explored the contemporary practice of ventriloquism in the United States.

In the end, the project was not of interest to the many sources who received an appeal for funding. The Folk Arts Media sector of the National Endowment for the Arts said no. The Walt Disney Company’s educational films division said no. Jim Henson said no through a personal assistant, who explained that ventriloquism is not the same thing as puppetry (or in this case, Muppetry), which forms the basis of “Jim’s interest and experience.” 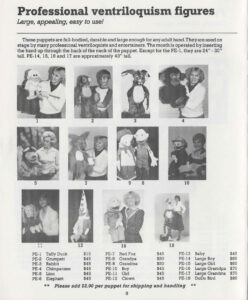 A page in the 1984-85 catalog from One Way Street, a Colorado-based puppetry and ventriloquism resource center

Notwithstanding, those who supported the Ventriloquism Project—folklorists Gail Matthews, Inta Carpenter, and Sandra Dolby, as well as filmmakers John Bishop and John Winninger—produced a significant body of work in their attempts to acquire funding. University Archives and Records Management makes this material available now. The archive of the Ventriloquism Project comprises a rich review of ventriloquial art in the United States in the twentieth century. The files included here could serve as a springboard for anyone researching ventriloquism, whether for a documentary, journalistic article, or academic publication.

At issue in many of these papers is the nature of ventriloquism as a folk art. Researchers argued that its decline in popularity in the early twentieth century marked a transition from popular culture to folklore. Their interpretation of this process is nicely summarized in a proposal to the NEA. They write: “The lay person may think that ventriloquism died out with the arrival of television, when in fact, it merely faded from popular media visibility. Over the years, ventriloquists have constituted a small but solid and growing community of interest.”

The archive’s ephemera provide extensive evidence of this community as it existed in the late 1980s. Gathered materials include advertising literature from Vent Haven, a ventriloquism museum in Kentucky; and correspondence with One Way Street, a puppetry and ventriloquism resource center in Colorado. Additional pamphlets, letters, and business cards from a variety of sources suggest the breadth of the proposed project. Had it gone forward, film crews would have captured footage in Indiana, Illinois, Wisconsin, South Carolina, and elsewhere.

The documentary was not meant to be, however, and the Ventriloquism Project was shelved until further notice. Research for the project however grew into then IU graduate student (and PI on the grant) Gail Matthews’ dissertation “Looking at life funny: Reflexivity in American ventriloquism.”

Interested parties are invited to view this archive, which, even though it was not funded, provides a valuable resource for aficionados of ventriloquism.