Update! Senator Kennedy’s campus address has been digitized and is now available through Media Collections Online from the IU Libraries! 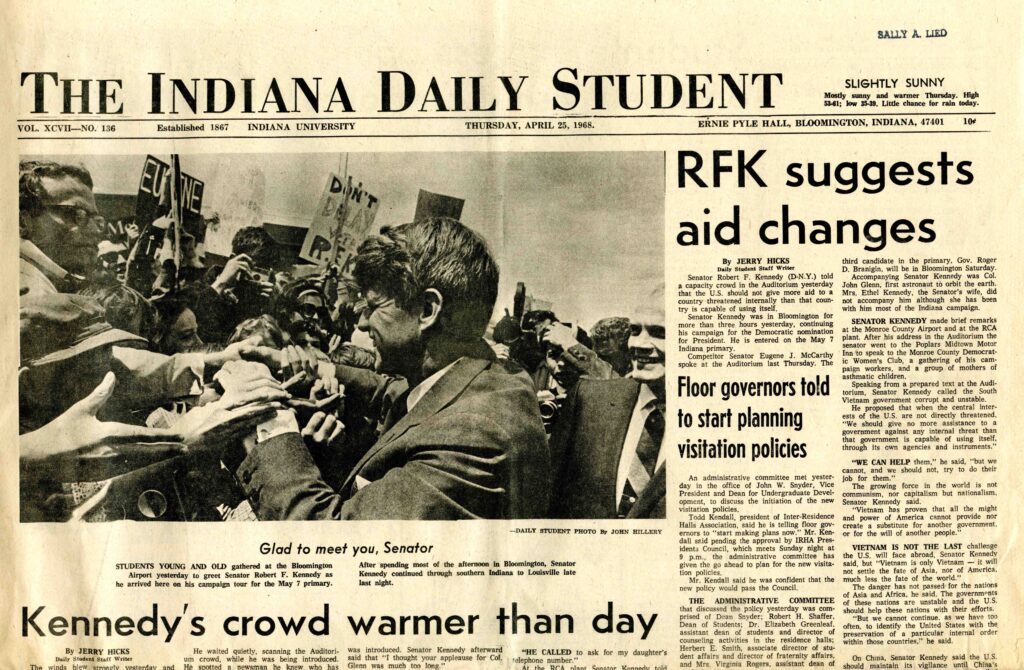 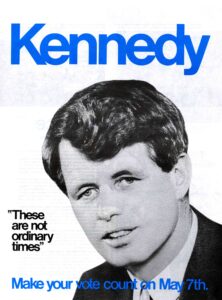 In the lead up to the Indiana primary of 1968, Senator Kennedy arrived in Bloomington as part of his cross-country campaign tour accompanied by former astronaut John Glenn. The pair were greeted by large crowds when they landed at the Monroe County airport. While in Bloomington, Kennedy made multiple stops, including the local RCA manufacturing facility and the Indiana University campus, where over 4,000 people came to hear him speak at the IU Auditorium. During his nearly 30-minutes of prepared remarks on April 24, 1968 (followed by a lengthy question and answer session), Kennedy focused on issues such as rural development through tax incentives, inequality in the education system, the injustices of the criminal justice system and decreasing America’s role as a world policeman stating that “we must make calm and discriminating judgments as to which governments can and should be helped.” Many of these comments were made within the context of America’s then involvement in Vietnam. With his remarks were often interspersed with laughter from the audience, his call for an end to educational draft deferments resulted from some audible boos from the likely predominantly student crowd.

In his concluding remarks, Kennedy called for the audience to use their privileges for the betterment of those around them, because he noted: 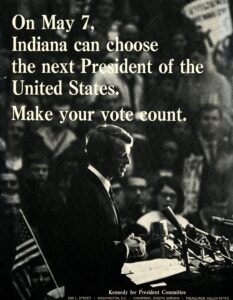 If we use it just for ourselves, if we use that gift, that we have, that we received, just for ourselves, then we can’t possibly survive as a society. We can’t possibly survive on this planet. Because it can’t be accepted the injustices. Whether it’s in our own country or around the rest of the globe. And if you do not do thus… no one else is going to do it…. I don’t just mean going and protesting, I don’t just mean supporting a candidate for political office, I mean just becoming actively involved yourselves, that you’re going to make a change, maybe in the life of a neighborhood, maybe a change in the life of some individual, that some individual or some group of people are going to live better because you lived, that’s the least we can do.

His remarks are remarkably relevant today.

Coincidentally, the IU Archives also recently received a generous donation of materials documenting Robert Kennedy’s 1968 campaign including the above posters from IU Alumnus Sally A. Lied (MS Education, 1963 ; Ed.D. 1972 ; JD 1974). Further information about Kennedy’s visit can also be found in this previous post. To view the rest of the materials including correspondence, buttons, and newspaper clippings, contact the IU Archives.