The University Archives recently processed the collections of three IU Libraries administrators. Each played an important role in the development of the library that we know today. 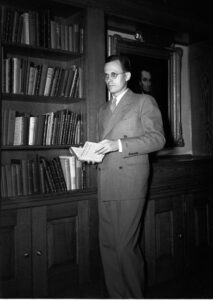 Robert A. Miller, Director of Libraries, 1944

Robert A. Miller (Library Director from 1942 until his retirement in 1972) is considered responsible for the structure of the university library system that is in place today.  He also worked closely with the architects and building planners who designed the Main Library (today the Herman B Wells Library).

From the early 1900s, the Bloomington campus library was located in Franklin Hall. However, the dramatic increase in student enrollment after World War I meant that the library had long outgrown its Franklin Hall home. IU’s President and later Chancellor, Herman B Wells had long advocated for a new library space. Finally, in 1966 plans for what would be called the Main Library were implemented under Library Director Robert A. Miller.  It was decided that the location of the new library would be at the intersection of 10th Street and Jordan Avenue next door to Memorial Stadium (the stadium was demolished in 1982 for the Arboretum). 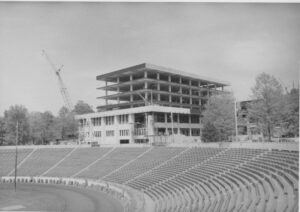 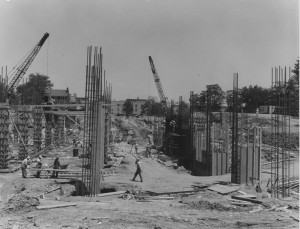 Designed to house 2,600,000 volumes and 5,000 undergraduate and graduate students, in 2005 the library was renamed the Herman B Wells Library in honor of his dedication and support for the university library system.

Cecil K. Byrd served in several positions during his tenure at IU, including Curator of Rare Books and Special Collections, Associate Professor, Assistant Director of Libraries, University Librarian, and finally professor and librarian emeritus. He assisted in the design of the Lilly Library and was instrumental in the donation of J.K. Lilly and Bernardo Mendel collections to the Lilly.

The impetus for a rare book and manuscript library at Indiana University was born in 1956 with the donation of J.K. Lilly’s extensive collection of rare books and manuscripts. The collection contained around 20,000 first editions and 17,000 thousand manuscripts. Construction began in March of 1958, opened to the public in June of 1959, and was dedicated on October 3, 1960. Today the Lilly holds more than 4 million books, 7.5 million manuscripts, 150,000 pieces of sheet music, and 30,000 puzzles. 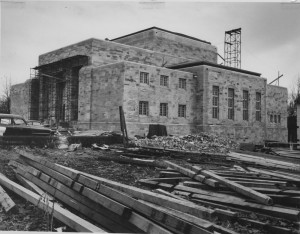 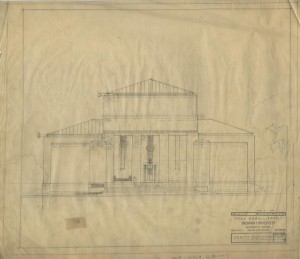 Architectural drawing of the Lilly Library, circa 1955

If you’re interested in learning more about these collections of the history of the IU Libraries, contact the IU Archives.