Tucked away in a seemingly innocent folder labelled “Correspondence, 1941-42” in the Training Course for Social Work collection is a reminder of a dark time in the history of Indiana University.  Amid memos detailing billing statements and curriculum plans is a notice from the Office of Admissions to various deans and directors, including the Director of the Training Course for Social Work.  The letter is dated June 12, 1942 and begins with, “In view of the present uncertain military status of the southern Indiana geographical zone in which Indiana University is located, the trustees of this University have decided that Japanese students should not be admitted to Indiana University at the present time.” 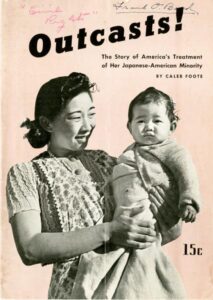 Outcasts! The Story of America’s Treatment of Her Japanese-American Minority by Caleb Foote, 1942

In the aftermath of the attack on Pearl Harbor, President Franklin Delano Roosevelt signed Executive Order 9066 which led to the relocation and internment of thousands of Japanese Americans living in established military zones.  In compliance with this legislation, universities along the West Coast discharged all students of Japanese descent.  Church leaders, university officials, and the YMCA-YWCA responded by establishing the National Japanese Student Relocation Council.  The organization assisted displaced students in applying to inland universities and finding housing in potentially hostile environments.

On April 26, 1942, the University of Minnesota set a precedent in the Midwest by refusing to accept relocated Japanese-American students.  The president of the University of Minnesota, W.C. Coffey, wrote to his peers to express his hesitancy in admitting Japanese students until the US government could address the issue and outline a clear course of action.  The admission question came to a head at IU on May 2, 1942 when the Department of Botany and Bacteriology received a request from UC Berkeley to admit two Japanese-American graduate students.

One week later, on May 9, 1942, President Herman B Wells addressed the Board of Trustees: “There is this to be said about the situation–when the casualty lists begin to come in–even though they might be loyal Americans as anybody, feeling is going to mount very high and you might have disturbances on the campus.”  One Board member responded by stating his fear that Japanese students “would get into subversive activity whenever he would have a chance.”  The Board swiftly disapproved the admission of Japanese students.

The Board’s decision did not end the debate.  The director of the National Japanese American Student Relocation Council sent a letter on August 14, 1942 to Frank O. Beck, Executive Secretary of the IU Committee on Religion with information about the program stating that “among the evacuees are approximately twenty-five hundred American-born Japanese students, who were enrolled in college.  These young people are not ‘aliens,’ but Americans by birthright, brought up in our American schools, eager to demonstrate their loyalty to American ideals, and go on with their education in preparation for useful service and still fuller assimilation into our national life.”  Officials at IU argued that they could not admit Japanese students based on overcrowding of native Indiana students, “important laboratory research on war problems,” and the proximity of the Naval Depot for the Atlantic fleet. 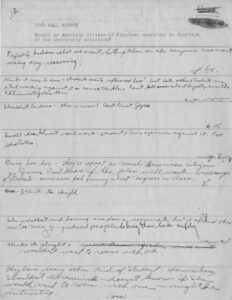 Anonymous responses to the question “Should an American citizen of Japanese ancestry be deprived of his university education?”

In October 1942, Bloomington residents and IU students held a Town Hall to discuss the question “Should an American citizen of Japanese ancestry be deprived of his university education?”  The responses to this question were mixed and included the following:

You can read all of the responses here. A writer at the Indiana Daily Student offered some wise words in response to the chaos: “We mustn’t lose our heads in the case of hating our enemies.  We should not exclude a chosen few from the periphery of the Japanese and condemn all that has any part of Japanese of any other aliens just because we happen to be warring with their patterns of living.” 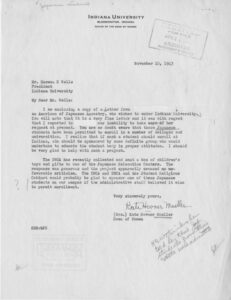 A year after the town hall meeting, in October 1943, a 19-year-old Japanese-American woman wrote to Kate Mueller, IU’s Dean of Women.  She explains, “I am…greatly interested in applying for entrance into Indiana University for a year or so to take up a Pre-nursing Course.  At the present, I am employed at the Medical Center, Robert Long Hospital in the Nursing Division.  I am one of the millions of people who are engaged in an essential war industry and realize that I am contributing towards the welfare on the homefront.  However, I feel as though I could do more if I could become trained for the profession that is so vital at this time.  My parents are still at a War Relocation Authority Camp in Hunt, Idaho but are all for this plan of mine….I hope and trust in God that you will aid me in every way possible.”  Although, the Dean of Women passed along the letter with a plea to President Wells, she was forced to comply with university policies and reject the application.

Three honorably discharged veterans managed to change the prevailing attitude of university officials.  In late 1944, the Japanese-American veterans submitted letters to the Office of Admissions to request enrollment at the University.  The Board of Trustees revisited the issue of Japanese enrollment on December 13, 1944.  After reviewing the veterans’ qualifications and patriotism, the Board “approved the recommendation of President Wells for the admission of honorably discharged veterans of Japanese-American ancestry on the same basis as American citizens of any other ancestry.”  In the same meeting, they also approved the admission of Japanese-American students from the state of Indiana.

Victory in Japan was celebrated on August 15, 1945 with a formal surrender ceremony following on September 2.  The Board of Trustees finally repealed the decision to deny Japanese students admission to the University on September 21, 1945.  However, reminders of such grim wartime decisions continue to haunt many of IU’s collections.