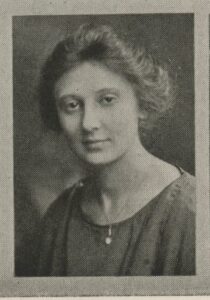 Emma Julia Phillips just couldn’t keep herself away from Indiana University.  Over a period of nearly 50 years, Emma earned a BA, MA, and PhD from IU.  Her parents, John Wilbur Phillips and Arvia Phillips, were both school teachers and perhaps this explains her love of learning.  Emma graduated from Alexandria-Monroe High School in Alexandria, Indiana in 1918 and enrolled in Indiana University shortly thereafter.  As an undergraduate, she was involved in the French Club, elected to Phi Beta Kappa, and inducted into Pi Lambda Theta, an honor society and professional association for educators. In 1923, she graduated from IU with Distinction and earned a Bachelor of Arts in Romance Languages.

Upon graduation, Emma taught French and English at high schools in Alexandria, Indiana and Alton, Illinois.  During her summer breaks, Emma attended classes at IU. She received a Master of Arts degree in English from Indiana University in 1934.  Her thesis, The Technique of George Whyte-Melville’s Novels is an analysis of 28 works of Scottish novelist George Whyte-Melville. 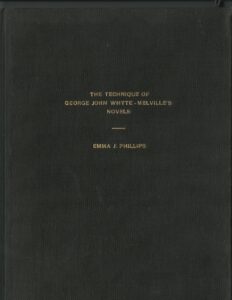 Upon completion of her master’s, Emma took a leave of absence from teaching to study French in Grenoble, France for several months in 1936.  She wrote a lengthy letter that was published in her hometown’s newspaper, The Alexandria Times-Tribune, that details the political situation in France in the 1930s.  She offers her opinion on politics and writes, “I may say, however, that I am not quite so sure as I used to be that the United States ought to be in a great hurry to join the League of Nations.”  Never one to rest on her laurels, Emma returned to teaching while simultaneously taking graduate level courses through correspondence from the Indiana University Division of University Extension.

Emma returned to Bloomington to complete her Ph.D. coursework in the 1950s.  In 1967, she earned her Ph.D. from Indiana University in English with minors in American Literature and Comparative Literature, 44 years after she earned her Bachelor’s.  Her thesis is titled Mysticism in the Poetry of Emily Dickinson.  At the age of 91, Emma died on April 11, 1991 in Alexandria.

The IU Archives has many notebooks and assignments related to Emma’s studies as well as her commencement materials and theses.  Contact the IU Archives to learn more about Emma’s life.