Dolores Whitney completed a degree at Wesleyan University in 1945 and graduated with a M.S. from Indiana University in 1950. While we don’t know much regarding her life after IU, one box of documents and ceramics that she donated to the IU Archives in 1965 leaves us clues. In particular, a small scrapbook recording her time in Japan from 1947 to 1948 as a U.S. Civil services employee really stands out.

Bound in a soft leather cover, Dolores’ time in Japan is encapsulated. Like most scrapbooks, it is filled not only with photographs of the places she went and people she went with, but also ephemera documenting her time there. She includes maps, brochures, pamphlets, postcards, and even a drawing of herself done by a young Japanese student artist. All these commemorate her adventure away from home and I can only imagine her sitting with family and friends showing them all that she did during her time away. 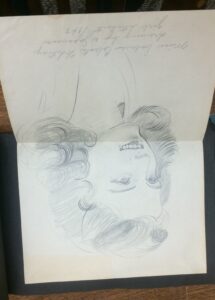 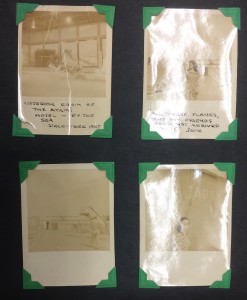 This item really had me connecting with Dolores Whitney because sixty or so odd years later, I also make scrapbooks of my travels. Last May I took a trip to Ireland. It was my first trip out of the country. Like Dolores, I hoarded all the tickets, maps, postcards, and brochures I came across. When I got home I bound them into a homemade scrapbook to document my time across the pond. Probably like Dolores, I showed this to my curious family at Thanksgiving. While my scrapbook is not tied together in soft leather, it still serves the same purpose: to hold the scraps of a trip that I will want to tell my grandchildren about someday.