Leading up to the anniversary of the disastrous 1883 fire that changed Indiana University Bloomington’s future, intern Ava D. provides a short history of some of the most significant fires IU has faced in its nearly 200 years. Stay tuned for the story of the 1883 disaster! 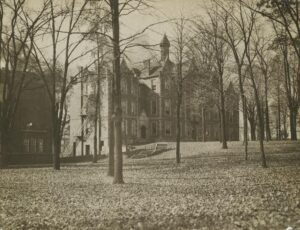 Eighteen years after its creation, the New College Building at IU’s original Seminary Square campus was consumed in fire from a still-unknown source, along with its valuable contents. According to Theophilus Wylie, who would later blame himself for IU’s second major fire in 1883, the April 1854 fire resulted in the total destruction of “its small, though valuable, library, its chapel, recitation rooms, the neatly fitted up Philomathean and Athenian Society halls, with their library and furniture.” While the incident resulted in an estimated loss of $15,000 worth of property, including the 1,200-volume library collection, it also spurred the creation of the IU Alumni Association to help support and rebuild the school; the IUAA continues as an important member of the IU family. 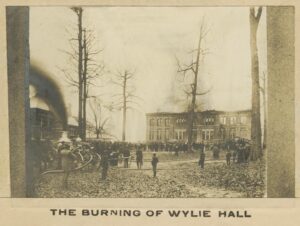 The only known photograph of the fire.

The third major fire in IU history, the February 7th fire of 1900, damaged a portion of Wylie Hall, one of two original buildings on the Dunn Woods campus, IU’s home to this day. Wylie housed classrooms and workspace for students of chemistry, mathematics, and law; the fire, though not confirmed, is thought to have originated in the chemistry department from a chemical fire. Most of the “valuable apparatus and chemicals” were saved, according to IU’s student paper The Student, (now IDS) but the fire still cost the university $20,489 in structural damage and an estimated $6,000 in books and apparatus. In order to reach the only phone on campus located at Maxwell Hall, then-Professor William Lowe Bryan (IU President, 1902-1937) hoisted Professor Morton on his shoulders and helped him through the transom, a comical image later featured in a cartoon in the 1900 Arbutus. 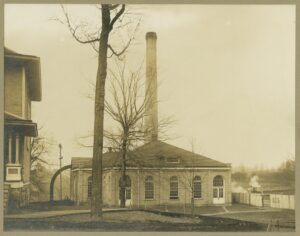 On September 22, 1929, a short-circuited generator inside IU’s third power plant caused a fire that resulted in over $100,000 in damage to the roof and equipment at IU’s power plant. Members of IU’s ROTC chapter controlled the crowd of students as the fire department fought the flames. Once again, the city of Bloomington provided for IU in the wake of a fiery disaster and temporarily provided lighting services for the campus. The Indiana Daily Student, whose headquarters were located in the old power plant next door and whose electricity was subsequently lost in the blaze, was displaced and moved to share space with the Bloomington Evening World in order to report the news in a timely fashion. 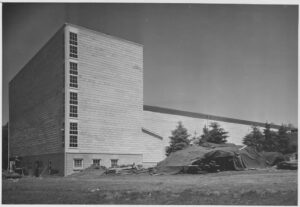 Construction on East Hall in 1948.

From modest beginnings as a repurposed WWII airport hangar, the now-razed East Hall provided significant and important performance and practice space for IU’s School of Music.  The “temporary” building served as headquarters for operatic performances until 1968, when defective wiring in the stage area led to a fire bringing $445,246 in structural and property damage. Up in flames went many historically and culturally important operatic materials, from costumes for upcoming shows to musical scores and props from past performances to a several-thousand-dollar Steinway piano. 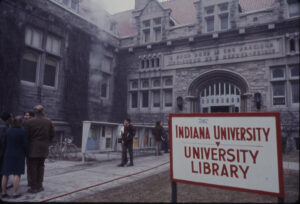 The aftermath of one of the arson attacks on the IU Graduate Library, 1969.

Before becoming the Student Services Building, the building later christened Franklin Hall once held the IU Undergraduate Library, with the Graduate Library spilling into the Student Building next door. In 1969, the library was the target of two arson attacks, first on February 17, then on May 1. Though not confirmed, the civil unrest on campus at the time, in part stemming from the Indiana governor’s demand to stymie tax dollars to increasingly growing university and library costs, may have been the impetus for the fires. The first fire caused $165,000 in property damage and $500,000 in collections, destroying 75,000 volumes and badly damaging 20,000 more. Though the second fire destroyed only 30,000 volumes in comparison, the collections replacement cost $600,000, while the property damage totaled up to $1 million. 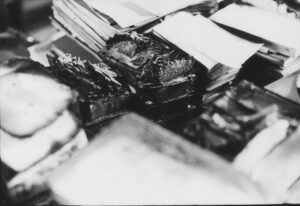 A sampling of damaged books from the Feb. 20 fire.

An article in the April 1969 Indiana Daily Student muses on the identity of the culprit, offering insight into the cultural environment of the incidents: “Is there something sinister going on around the campus today? Are the dissidents indeed Communists? To this, I.U. President Sutton answers that Communists wouldn’t touch today’s handful of campus radicals with a 10-foot pole. Neither would the vast majority of students or faculty. If the radicals were to be characterized, most people think, it would be the anarchists on campus back in the ‘30’s.” On June 28, 1969, a library employee was arrested as the arsonist in question. Once again, though devastating, the fire proved to yield long-term benefits for the university as it solidified (and possibly accelerated) the creation and move to a new undergraduate library, the building now known as the Wells Library. After all, as librarian Cecil K. Byrd said, “can you imagine trying to run a university without a library?”

In the midst of the 1990 Little 500 celebration, a series of fires determined to be arson swept through the Bloomington campus. During the last two weeks of April, a series of escalating fire-related incidents were extinguished, beginning in the Business School with furniture doused in flammable liquid and set afire. While this incident was caught early enough to cause little damage, the arsonist’s next stop was the School of Music, where 10 pianos burned and created over $20,000 in damage. Fires in the reception area of the Law School and the stage of the Fine Arts Auditorium followed, luckily resulting in minimal damage due to the quick actions of bystanders. The Fine Arts building was targeted again the following weekend, this time beginning in a metal cabinet full of craft supplies on the fourth floor. A number of other incidents, from furniture set ablaze in Ballantine to a trash can fire at HPER, peppered the two-week period with thirteen mysterious incidents of arson. The culprit was never found, despite the implementation of a 24-hour patrol in all University buildings. 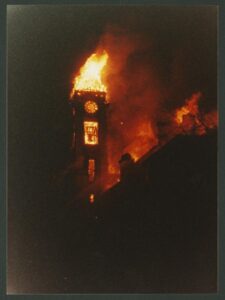 A campus landmark that inspired Hoosier composer Hoagy Carmichael’s “Chimes of Indiana,” the IU Student Building was originally intended by President Joseph Swain’s wife Frances as a space for female students to congregate between and after classes. A letter from John D. Rockefeller, Jr. suggesting that they include a male wing to the building – as well as a hefty donation – led to a co-ed building with two gendered wings separated by a common space, built in 1905-1906.  Besides the trademark clock and bell tower, the building was also the one-time home to a gymnasium for women, a barber shop, a billiards room, and a cafeteria in the basement. On December 17, 1990, while the building was undergoing renovations, the building caught fire and a number of the custom-made bells from the Netherlands of the beloved clock tower were broken and, in some cases, melted. IU was awarded $1.9 million for the damages, which were caused by welders who did not properly extinguish the hot coals used in their work, sparking the late-night fire.

Stay tuned for the story of the fire that led to some major changes for IU Bloomington!