Like many young couples at IU after World War II, Carolyn and John Fink took advantage of the G.I. Bill and lived at I.U. while earning their degrees. Their life is recorded through Carolyn’s memoir, “Nightingales in the Branches” from 1955 which offers the reader glimpses into the life of married veterans and their wives at Indiana University. Carolyn covers everything from illicit hot plates in the married dorms to saying hello to Nick at Nick’s Olde English Hut. 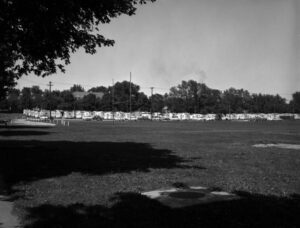 Although Fink’s narrative touches upon the stress and trials of married life in small quarters, it also offers delightful tidbits that make her memoir relevant even to modern readers. Like many animal-lovers, Carolyn likes to talk about the furry roommates she and her husband acquired during their time living in a trailer near campus. In fact, she dedicates all of Chapter 10 and 11 to their “Cat Era,” which included four cats named Eightball, Fluffy, Charlie, and Orange. She tells of how Eightball only went to the bathroom in ashtrays when they left him inside, and how sickly little Charlie seemed to the rest of them. She tells of how they finally discovered that the prissy, feminine Fluffy was actually a tomcat and how Orange seemed to care little about their welfare. 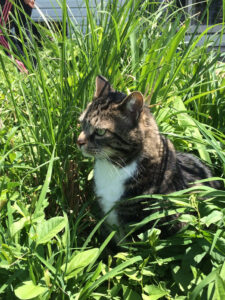 While the whole memoir is interesting and made me feel like Carolyn and John’s close personal friend, the “Cat Era” chapter endeared me to them forever. I, too, like to tell everyone about my cat, Daffy, and was thinking “Daffy does that too!” all through the chapter. For instance, like Eightball, he answers all my questions directed at him with a mew and, like Orange, I am pretty sure he could not care less if I almost kill myself trying to avoid stepping on him as long as he is fed.

If you are interested in married life at IU, the G.I. bill, or just like to read stories about cats, “Nightingales in the Branches” is an excellent read.